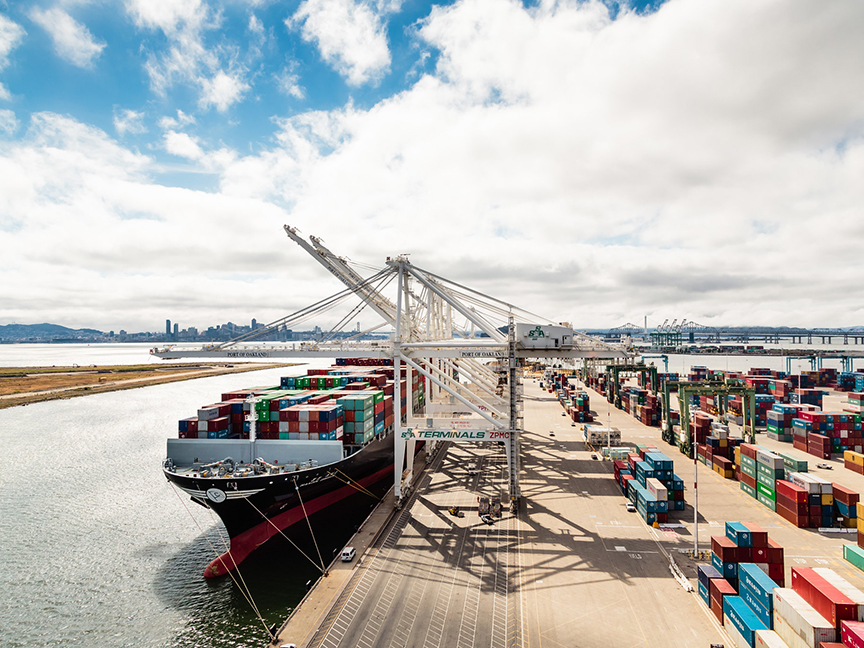 In November of 2019, Danny Wan was appointed to the position of executive director of the Port of Oakland. In naming him to the top position, the port drew from among its ranks — Wan has served for 13 years in a variety of advisory and executive management roles, including port attorney. In this conversation with SupplyChainBrain editor-in-chief Bob Bowman, Wan outlines his vision of the port’s future.

SCB: As the new executive director of the Port of Oakland, what is your number-one priority?

Wan: I’ve been an Oakland resident for going on 40 years. So I’m absolutely a regional booster, and really excited to be executive director. My priority is to make sure the Port of Oakland continues to be the big player in the local economy, and that we’re vital and continuing to grow. To do that, we need to be an efficient port, to get people in and out as quickly and economically as possible.

SCB: For a long time, the port was viewed as essentially a facility for handling exports, not a first port of call inbound for ocean carriers from Asia. Do you see that changing?

Wan: We’re at a 50-50 split between imports and exports. Our regional economy is growing due to tech [companies] and the gig economy, and efficient delivery depends on many beneficial cargo owners and warehouses being located here. Obviously that’s going to continue to be attractive to the shipping lines. Hopefully a first port of call will come, as a outgrowth of the local economy.

SCB: Where do you fit competitively vis-à-vis other West Coast ports, including the L.A.-Long Beach complex to the south, and Seattle, Tacoma and Vancouver, B.C. to the north?

Wan: That’s shown by the latest cargo-volume statistics. The San Pedro [Southern California] ports have seen a fairly significant decrease in recent months, because of the chaos that’s hitting import cargo. Oakland’s volume, on the other hand, has stayed fairly stable. That’s because we’re well positioned in terms of serving the regional economy of Northern California, Nevada and Utah. That economy is chugging along well, and as our exports remain strong, we continue to benefit from that niche among West Coast ports.

SCB: How about your competitive position relative to East and Gulf Coast ports, which are drawing more direct sailings from Asia due to the widening of the Panama Canal?

Wan: We’re concerned that West Coast ports as a whole have a reputation as being second to other routes for shipping cargo to the Midwest and other inland destinations. Oakland will continue to participate along with other West Coast ports, to talk about how we can position ourselves more competitively with the East Coast. On the other hand, as I mentioned before, Oakland is uniquely positioned to serve our regional economy. Agricultural exports from that region continue to be strong.

SCB: Containerships continue to get bigger. How is Oakland handling the largest ships on the water these days, and what must you do in future to accommodate these mega-vessels?

Wan: We had a conversation with some of the shipping lines in Asia last month, and they’re very satisfied. Oakland’s harbor is deep enough, 50 feet. They’re impressed with the reach of our cranes. In fact, we’re going to have some of the tallest cranes in the U.S. pretty soon. So we’re ready for the big ships. We’re currently studying the width and length of our turning basin, and planning for a possible expansion of that.

SCB: How do you see your position in intermodal services today, especially with regard to railyards that support marine terminal operations?

Wan: We’re ready in terms of intermodal. If you look at our layout, we have quite a bit of capacity in our rail facilities. Both the Union Pacific and Burlington Northern Santa Fe have their own yards at the port, and we also have a spanking new intermodal railyard on the site of the former Oakland Army Base here, that’s ready for a unit train to pull in. They’re near-dock, not on-dock. We’re looking at ways to connect closer to the dock at all times.
One of the interesting developments here is that there are a lot of mega-warehouses popping up in Tracy, Reno, Sparks and those areas. That business is going to be increasingly attractive to the railroads as short-haul transport. We can put some of the cargo onto trains to get to those warehouses, rather than on trucks.

SCB: What’s at the top of your list for development projects going forward?

Wan: As you know, the Port of Oakland runs both the airport and seaport, as well as our commercial real estate — restaurants and tourist attractions. Those are our three lines of business. When we talk development, all three have exciting plans. In terms of the seaport, we recently developed our Cool Port, which is our refrigerated warehouse. It’s one of the biggest on the West Coast. Oakland continues to have the largest share of reefer business on the West Coast. We’re going to continue to expand that capacity. Number two, the new CenterPoint complex is starting to build a big warehouse, right near the dock on port property. We’re concentrating on increasing efficiency and refurbishing infrastructure.

SCB: Are you looking for the airport to play a larger role in cargo?

Wan: We’re already the biggest cargo handler among Bay Area airports. We continue to have good relationships with FedEx and UPS. There’s no immediate expansion plan, but they’re humming along.

SCB: Every major port complex runs into tensions with the surrounding community and nearby residents about noise, lights, pollution and truck traffic. How are you reaching out to the community around Oakland to address those concerns?

Wan: I think we have a very good working relationship with our neighbors, especially in West Oakland as well as with surrounding cities. One of my emphases will be to bring those neighbors closer in, to be more transparent with them about our plans. We have to do it in a way that includes them, to make sure that the impacts to them are identified and mitigated. Because at the end of the day, everybody in Oakland and the region understands that as a seaport, airport and tourist destination, our success is their success as well.

SCB: Where are you aiming your marketing efforts these days?

Wan: We want to make sure that the BCOs [beneficial cargo owners] that use our ports continue to be happy with us — that it makes sense for them to go through Oakland. We want to reach out to logistics folks who handle agricultural products and tech, and emphasize that Oakland is the quickest and most efficient port of entry for inbound as well as outbound. Our marketing efforts are going to be intensely focused on our regional partners, to make sure they understand the benefits we offer.

SCB: Because you’re so dependent on agricultural exports, which have been seriously affected by the current trade war with China, what concerns do you have about that dispute?

Wan: We’re very concerned about the impact of tariffs on West Coast ports generally. We’re engaged in lobbying efforts to make sure the impact on agricultural products is considered. We want to be as helpful to our ag partners as possible. It’s about knowing what their needs are, making sure our terminal operators connect with them, and offering services that make it easier for them. For example, our night gates program has recently been very successful in relieving congestion, as well as our appointment system.

We want to be unique, as in the case of our reefer business and warehousing services. Hopefully we’ll have a short-haul intermodal connection as well. We want to make sure that we offer things that other ports might not offer.