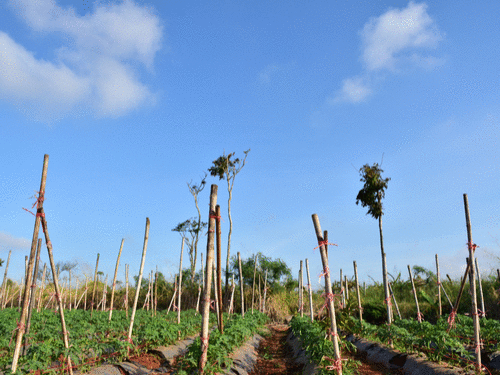 Al Gore’s 400-acre farm is located in Carthage, a small Tennessee town where the former vice president and senator traditionally kicked off his political campaigns. During his second act as a famous environmentalist, the farm became the site of a training program for aspiring climate activists, and more recently, an experiment in what Gore said is the world’s most realistic chance at averting climate catastrophe.

Topsoil, the foot or so of ground underneath your feet, is responsible for almost all food production on Earth. It also stores more than three times as much carbon as forests. Today, agriculture is a net carbon emitter, contributing about 14% of all greenhouse gas emissions, but unlike power generation or automobiles, it can be turned into a net absorber, pulling carbon out of the atmosphere.

If farming practices are changed through the use of cover crops, low-tilling and tree-planting, Gore said, agriculture conglomerates and family farmers alike could theoretically make their farms more productive while fighting global warming. Those changes can also replenish nutrients to the world’s soil, of which 33% has already been depleted.

A virtuous circle if there ever was one — and one that’s already attracting attention from farmers, consumers and food companies.

Gore, 71, is preaching the benefits of so-called carbon farming, a form of regenerative farming, at a time when U.S. President Donald Trump has been trying to roll back regulations meant to limit greenhouse gas emissions. And while science-based climate policy has been a prominent topic on the Democratic presidential campaign trail, it’s not always seen as a priority.

Gore, who these days is more of a denim-wearing advocate than reserved technocrat, remains undeterred. His laboratory has been the farm where his parents once raised livestock and grew tobacco. Last month, he invited 450 soil experts — farmers, scientists, chefs, food experts, entrepreneurs and investors — to join him there to discuss how to scale regenerative farming into something that might actually slow climate change.

“We’ve waited so long to start to address the climate crisis,” Gore told those gathered. “We will need to both reduce emissions drastically and take as much carbon out of the atmosphere as we possibly can.”

Unlike 2006, when Gore’s film “An Inconvenient Truth” was met with skepticism in some quarters, 13 years of intensifying storms, catastrophic floods and unprecedented droughts and wildfires have persuaded more Americans that there’s a very big problem. The goal now, Gore said, is to get people to start taking carbon farming seriously.

When it comes to actually tackling what may soon become an existential crisis, the numbers are daunting. Trillions of dollars are needed to adapt civilization to the near-term consequences of climate change while tens of trillions of dollars are needed to slow its advance. But Gore said there are still too few plans to reverse global warming that don’t rely on technology that has yet to be developed.

“Planting trees and sequestering carbon in soil are likely to remain the two most effective approaches,” Gore said in an interview at his Carthage farm. “There’s already some indication that farms that operate this way are more resilient in the face of climate extremes.”

Carbon dioxide levels in the atmosphere are at their highest in 3 million years. Oceans, the biggest carbon sinks of all, are acidifying because they hold too much of it. Plant life, which absorbs CO2 through photosynthesis, can sink carbon into the soil. Regenerative farming helps speed that along — with the added benefit of producing more nutrient-rich soil.

Rattan Lal, a professor of soil physics and director of Ohio State University’s Carbon Management and Sequestration Center, is the key scientist behind Gore’s thinking. Lal served on the Intergovernmental Panel on Climate Change (IPCC) when it shared a Nobel Prize with Gore in 2007, and was awarded the Japan Prize this year for his work on soil carbon sequestration.

The world’s population currently uses more than a third of the planet’s surface for agriculture, according to the United Nations. In the U.S., close to 40% of land is farmland. Soil used for agriculture has degraded and eroded over centuries of use, losing between 20% and 60% of its original carbon content, according to the IPCC. Lal’s research shows that soil can sequester carbon at rates as high as 2.6 gigatons each year. An aggressive, global combination of tree planting and increased vegetation along with soil carbon sequestration, he said, has the “technical potential” to absorb 157 parts per million of CO2.

With about 415 parts per million in the air today — a huge jump compared with a few decades ago — removing even a fraction of that could slow the advance of global warming.

“There is virtually no analysis that shows the feasibility of doing any of this at scale.”

Gore is realistic when it comes to the fraught politics of climate change and the policies that would need to align to make that potential possible. Moreover, carbon farming is a nascent concept in the U.S.: California has a growing program and Hawaii’s plan to become carbon neutral by 2045 includes a carbon farming framework. U.S. Representative Alexandria Ocasio-Cortez’s “Green New Deal,” supported in some form by several Democratic presidential candidates, simply encourages farmers to improve soil health.

But even without any legislation on the horizon, big agriculture is starting to pay attention.

Not everyone is convinced its time has come, though. Timothy Searchinger, a research scholar at Princeton University who has studied the issue, said scalable carbon farming is still very much a pipe dream.

“There is an unbelievable amount of scientific uncertainty,” Searchinger said. “There is virtually no analysis that shows the feasibility of doing any of this at scale.”

Indeed, while there is some evidence that soil carbon can be rebuilt on degraded land, the technique requires putting so much nitrogen in the soil that the technique may not be viable in some places, he said. Additionally, many regenerative farmers discover that after a few years of no-till farming, their yields begin to fall. Searchinger said better options for achieving natural carbon sequestration at scale would be to focus on reducing deforestation and preserving peat lands.

“It’s not the most useful thing to do in agriculture,” Searchinger said. While carbon farming would be helpful, he said the bigger agricultural climate issue is methane from livestock, something that might be addressed with feed additives.

At its most basic, carbon farming is about leaving the ground alone. Simply plowing and tilling fields can disturb soil’s natural structure, releasing stored carbon into the atmosphere and displacing insects and microbes necessary for healthy soil. No-till farming creates fields that are better at acting like a sponge to absorb both water and carbon.

Gore’s home state Tennessee leads the U.S. in no-till farming, with more than 78% of its farmland managed that way, versus 37% for the U.S., according to the Soil Health Institute. On his farm, some 10,000 trees have been planted to increase soil carbon. Small groups of cattle and sheep are rotated to graze in different areas, adding natural fertilizer to soils. The farm uses compost and cover crops to keep the soil healthy, rather than for their profit potential.

Regenerative farming has more costs than traditional methods, especially upfront. Only about 108 million acres across the U.S. are using some regenerative practices, according to Project Drawdown, a climate research group (as of 2012, the government said there were 914 million acres of farmland in America). The group estimates it would cost about $57 billion to convert another 1 billion acres by 2050, but that some 23.15 gigatons of CO2 could be sucked out of the atmosphere by doing so.

While not a solution to the climate crisis by itself, Lal told the audience at Gore’s farm that regenerative farming could be, at the very least, “a bridge to the future.”

Planting the same cash crops each year without rotating them tends to deplete nutrients from soil. Regenerative farming, meanwhile, results in more nutrient dense-crops. But most farmers don’t have any incentive to change what they are doing, because staples like wheat, rice, soybeans and corn are usually covered by federally-subsidized U.S. crop insurance — a $100 billion industry which currently guarantees that more than 290 million acres of U.S. farmland deliver returns for farmers regardless of the harvest.

“For most people, this is a very new idea,” said Will Rodger, director of policy communications at the American Farm Bureau Federation. “We’re certainly aware that carbon can be stored in the soil, but farmers have very narrow margins. Many of our members are looking very closely at it, but the question is how to make it a business.”

Gore predicts that popular adoption of regenerative farming will someday take hold the same way residential solar and electric vehicles have caught on. “Farmers are doing this because they think it’s better for them,” Gore said. “I look for signs of hope.”