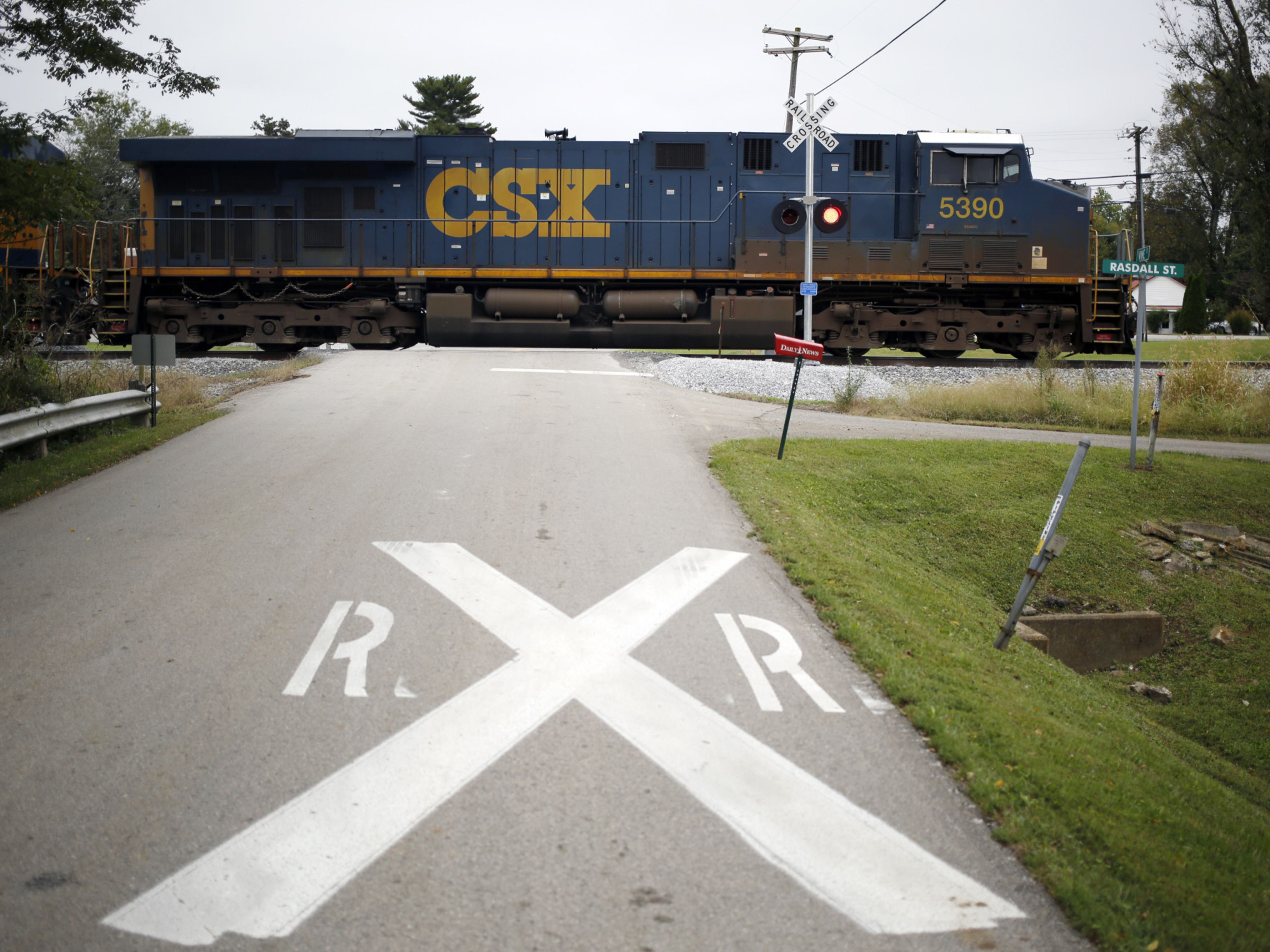 A new white paper from Michigan State University’s Eli Broad College of Business, in association with Maine Pointe, outlines the biggest challenges that rail carriers, shippers and investors are facing today. It reveals major concerns of shippers about rail’s service quality, reliability, degree of communication, flexibility and cost. In this conversation with SupplyChainBrain editor-in-chief Bob Bowman, Mike Notarangeli, executive vice president and engagement partner with Maine Pointe, and Nick Little, director of railway education at the Center for Railway Research and Education at the Broad College of Business, discuss the contents of the paper, and explain why railroads should be focusing on digital transformation and the end-to-end supply chain.

SCB: Is rail taking on new importance in supply chains today? And if so, why?

Notarangeli: Rail has always been an important part of shipper supply chains. It’s going to take on a greater importance as the roads get more congested, the driver shortage continues, and people need to move more freight. I do believe there’s a grand opportunity for shippers, carriers and investors to engage holistically to create new solutions. But a lot of the paradigms that exist have to change to take advantage of the future of rail.

Little: Rail has a very rich history that goes back almost 200 years. It started off with the ability to move all different types of freight, but very quickly became renowned for being a low-cost, land-based mover of heavy and awkward items that in many cases were of fairly low value. As the economy shifts from industrial manufacturing to an age where technology is dominant, the satisfaction of the end consumer becomes paramount. Rail has to change the way it behaves to be a successful part of that new economy.

Little: That depends on what metrics you use. If you look at performance on unit trains and heavy loads, then yes, it has improved. We’re able to move larger weights and volumes thanks to more powerful locomotives and better braking systems. But if you look at carload traffic, the answer’s clearly a no in terms of end-to-end journey time. Isn’t that the real metric that we should be looking at?

Notarangeli: From a shipper perspective, I would say that rail hasn’t fulfilled its potential yet. Today’s high-velocity supply chain requires precision, agility, and the ability to be innovative. And the relationship between shippers and carriers has become very rigid. Each side is digging in and focusing on what they need to do. What’s happening now is that there’s no way to measure customer satisfaction and true on-time delivery. There’s no way to be agile if you’re dealing with a Class 1 railroad, and shippers are frustrated with that. There’s an opportunity to collaborate and create different kinds of solutions. It lies in figuring out how to give shippers the solutions they need to create a win-win situation.

SCB: According to this paper, what are shippers’ specific concerns and complaints about rail quality?

Little: The biggest one is the fact that there’s so much variability between what is promised and what is actually achieved. It’s hard for shippers to rely on rail as their primary modal choice. Clearly rail has cost and environmental advantages which a lot of shippers would like to take advantage of. But it’s not overall end-to-end transit time that’s the issue; it’s the variation in that time. It’s the inability to live up to a promise. And that leads to shippers and their customers having to invest in extra safety stock to keep their businesses running.

Notarangeli: There are a lot of parallels between rail and ocean transportation. In both cases there’s a large ecosystem of service providers beyond the Class 1 carrier. Shippers want one button to push to get total visibility and tracking. But in today’s environment, there are too many cutouts, too many blind spots in the supply chain. We see the same thing in the ocean industry, where there are many suppliers beyond the primary carrier that have bits of information and need interconnectivity to provide true visibility to the shipper.

Little: Behind the scenes there are 600 or more individual railway companies in North America. There are only seven Class 1s, and an awful lot of Class 2s and 3s that we refer to as short lines. They tend to be the face of the industry to many shippers, because they’re the ones that pick up and deliver. But once the short line hands that traffic over to a Class 1 for a transcontinental haul, they’ve lost all control and visibility, just as the shipper has. The information exists; it’s just not shared.

SCB: What steps should railroads be taking to meet shippers’ concerns and improve overall performance?

Notarangeli: First of all, it’s more than just that railways need to change. There needs to be a coming together of carriers, shippers and investors. That’s how this paper came to be. We interviewed those groups individually. Now we need to create a forum where they’re sitting together, much like GS1 does with its global council structure, where everybody comes to the table, puts their differences aside, signs NDAs [non-disclosure agreements], and comes up with solutions that will benefit the entire ecosystem.

SCB: Nick, do you have any suggestions for what railroads need to be doing?

Little: This paper is the first in a series. It focuses on the lack of effective relationships across the railroad industry. That was the first thing we looked at. As Mike said, if you can get everybody together, you can start to look for common solutions. This should be treated not as an individual problem between one shipper and one carrier, but one with common characteristics across the whole of the industry. We can then start bringing in ideas from other modes of transport — see what solutions they’ve developed that might also be applicable for use in the rail environment.

SCB: One of the points you stress in the paper is the importance of digitization of the rails. That’s a very vague term. What do you mean by digitization as it relates specifically to rail? What needs to be digitized?

Little: I’ll restrict myself to a couple of things that are evident on the supply-chain side. We’ve already mentioned that visibility is a problem: Where’s my consignment? When will it really arrive? Compare that to what happens if you place an online order in the Amazon marketplace, where you can pretty much get an hour-by-hour view of exactly where that consignment is. It tells you when it’s been picked, packed, and shipped, and whether there’s the possibility of a delay. You have a jolly good idea of when it’s going to actually arrive on your doorstep.

SCB: Not the case with rail, I assume.

Little: In rail, it’s almost the exact opposite. Things tend to go into what you could describe as a black hole. Every railcar has a unique identification number and is tracked on its journey across the country in a number of different ways, so the basic information is there. It’s just not used and shared. There’s an organization called Railinc, which is part of the Association of American Railroads, that gets all the information from track-side devices that capture car numbers as they go past, and are interchanged between railroads. That information is guarded by the railroad that owns it, rather than being shared.

SCB: But shippers can go online now and get status information from the railroads, can’t they?

Little: What we hear from shippers is that the information isn’t always up to date. The technology of positive train control is an overlay to existing safety systems. It keeps track of every train through global satellite positioning. That can add a lot more information, and maybe the railroads can use it to help improve the quality of the data they provide to their customers.

Notarangeli: We tend to view processes from a horizontal perspective. Instead, we should be thinking about the information that exists among all the players in the ecosystem. There’s plenty of it, but it’s not interconnected. Class 1 railroads, for example, collect and own a lot of information about what’s in their network. But that information might not be passed along downstream. And information that’s gathered downstream might not be shared upstream. As a result, there’s no single point that you can tap into to get complete ecosystem visibility. Over-the-road and air freight have solved this, but ocean and rail are lagging because there are so many different members of the ecosystem, with varying degrees of sophistication.

Notarangeli: There are a lot of third-party service providers that can take those bits of information and put them into a standard format and make them accessible. The future is to connect the dots — get all the right information in the right format, and make it available to the people who make the decisions.

Little: The railroads can do that. They’ve demonstrated it with hazardous materials. Trains pass through built-up areas carrying some pretty dangerous goods, and there’s a system in place that tells first responders what’s in each car, and where it is on the train. If there’s an accident, they can be there quickly with the right information to deal with it. I don’t understand why that type of information can’t be shared with commercial partners such as shippers and customers. I don’t think it’s a big jump. It’s just a mental step that has to be taken.

SCB: Historically, there hasn’t been much of a direct link between railroads and shippers of consumer goods. There has generally been a shipper’s agent or intermodal marketing company acting as intermediary. Are railroads establishing more direct links with those kinds of shippers today — and should they?

Notarangeli: As far as should they, absolutely. Rail is expected to grow 88% by 2035. To be able to do that, the conversation has to begin today with different kinds of shippers that need solutions that don’t necessarily involve hundred-car caravans. Folks that make non-commodity items would benefit from using rail if  it wasn’t so rigid. If there was more opportunity for shippers to participate, they would.

Little: It’s beginning to happen. Two of the Class 1s are beginning to do a couple of things in that direction. One of them, Canadian National, is calling itself a supply-chain company rather than a railroad. Another, BNSF, is looking to put together packages of solutions so that it can deal directly with businesses in that market. That’s very different from what they’ve done in the past.

Notarangeli: Words and definitions do matter, because a railroad that refers to itself as a supply-chain company is thinking broadly. Rail might be the core, but coming up with solutions requires a different mindset. That’s how you start it.