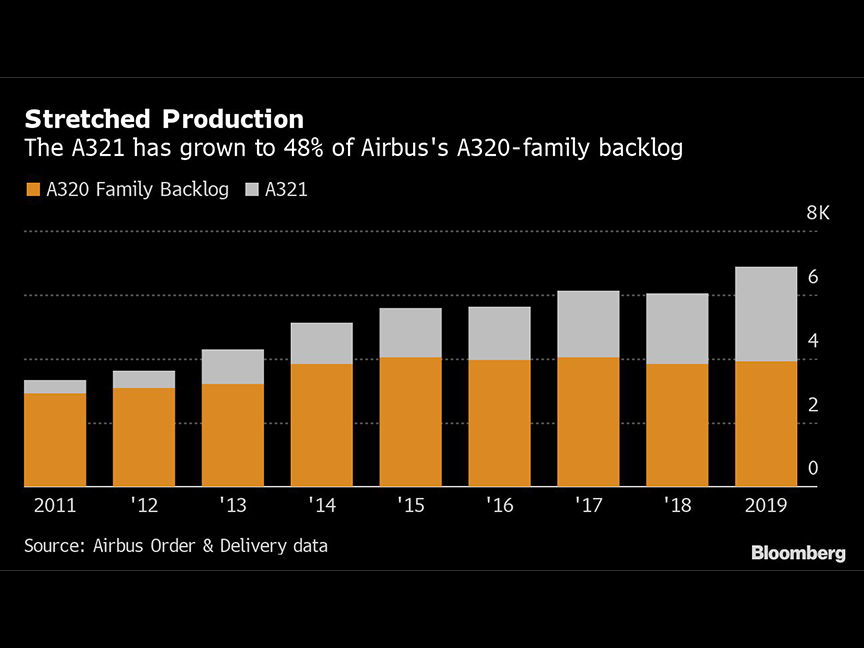 As Boeing Co. halts production of its beleaguered 737 Max, global rival Airbus SE is grappling with a very different problem: speeding output of its rival narrow-body.

So-called “stretch” versions of the A320neo jet have sparked an order frenzy as airlines snap them up to replace costly twin-aisle planes on longer routes or cram in seats on shorter legs. But to achieve that flexibility Airbus has had to offer a wide range of cabin layouts that’s made assembly far more complex.

Slower build rates on the top-priced A321 variant mean that the European company needs to lift deliveries 75% this month compared with November to meet full-year production targets. It’s a vital challenge for Airbus — not only to consolidate its advantage over a flailing Boeing, but also to maximize returns from its most expensive narrow-bodies as demand for even more-lucrative wide-body models moves past its peak.

“The A321 matters because as a stretch it should be by far the highest-margin aircraft of the Airbus narrow-bodies,” said Sash Tusa, an analyst at Agency Partners in London. The increased popularity of single-aisle types on longer routes could mean they come to account for three-quarters of the total value of planes delivered in a given year, up from 50% previously, he added.

Airbus is targeting 860 deliveries across its airliner range for 2019, 20 fewer than the initial goal after the company acknowledged in October that its plants were behind schedule. Each missed jet will wipe at least 10 million euros ($11 million) off profit, Citi Research analyst Charles Armitage estimates.

While that’s a big hit, the delays could have wider ramifications — potentially stymieing future orders for a model that’s already booked out until 2024 with a backlog of 6,193 planes.

Airbus Chief Executive Officer Guillaume Faury has already said that A320-series output won’t properly be back on track until 2021, by which time production is due to reach 63 aircraft a month from 60 now.

Responding to questions from Bloomberg, Airbus said meeting the 135-plane December goal will be “challenging” but that the company is counting on jets that were almost complete at the end of last month to swell handovers.

Demand for the A321neo planes has been “much higher than we originally anticipated,” a spokesman said, with a jet that once accounted for just 10% of A320-series demand now constituting above 40% of the backlog and growing.

Orders got a further shot in the arm with the launch of an extra-long-range or XLR upgrade in June. United Airlines this month agreed to buy 50 of the planes, joining a customer base that also includes American Airlines Group Inc., Qantas Airways Ltd. and JetBlue Airways Corp.

Airbus has received over 450 orders and commitments for the XLR, it said in a statement Tuesday. Shares of the Toulouse, France-based company have gained almost 57% this year, while Boeing is up just 2% after regulators grounded the Max in March following two fatal crashes in five months.

To be sure, Airbus has faced a year-end race to hit delivery targets before, with assembly-line staff working through the holidays to hand over 127 jets in both December 2018 and 2017.

Those delays were focused on glitches with jet engines at suppliers. This December’s challenge is a different one, concerning the pace of cabin installation at Airbus’s A321 assembly site in Hamburg.

At the heart of the holdups is the Airbus Cabin Flex option that allows airlines to choose from A321 configurations ranging from a high-density economy layout accommodating 240 people at India’s Indigo to 102 seats in four classes — including flat-bed berths — at American.

The combinations require changes to the location, layout and number of emergency exits and even galleys and toilets. Airbus says it has hired over 1,000 people for the Hamburg line and added 20 robots to improve efficiency.

The long-range A321LR entered service a year ago, while the XLR, launched at the Paris Air Show in June, is set for its first delivery in 2023. The new plane, with a range of 4,700 nautical miles, has a list price of more than $140 million, compared with $108 million for the baseline A320neo.

Airbus’s long-term fix should come in the form of a new assembly line on the site of an A380 superjumbo facility in Toulouse that’s set to close in 2021 as the double-decker ends production. The location will most likely be devoted to the A321neo and its variants in order to ease the pressure on the Hamburg plant.