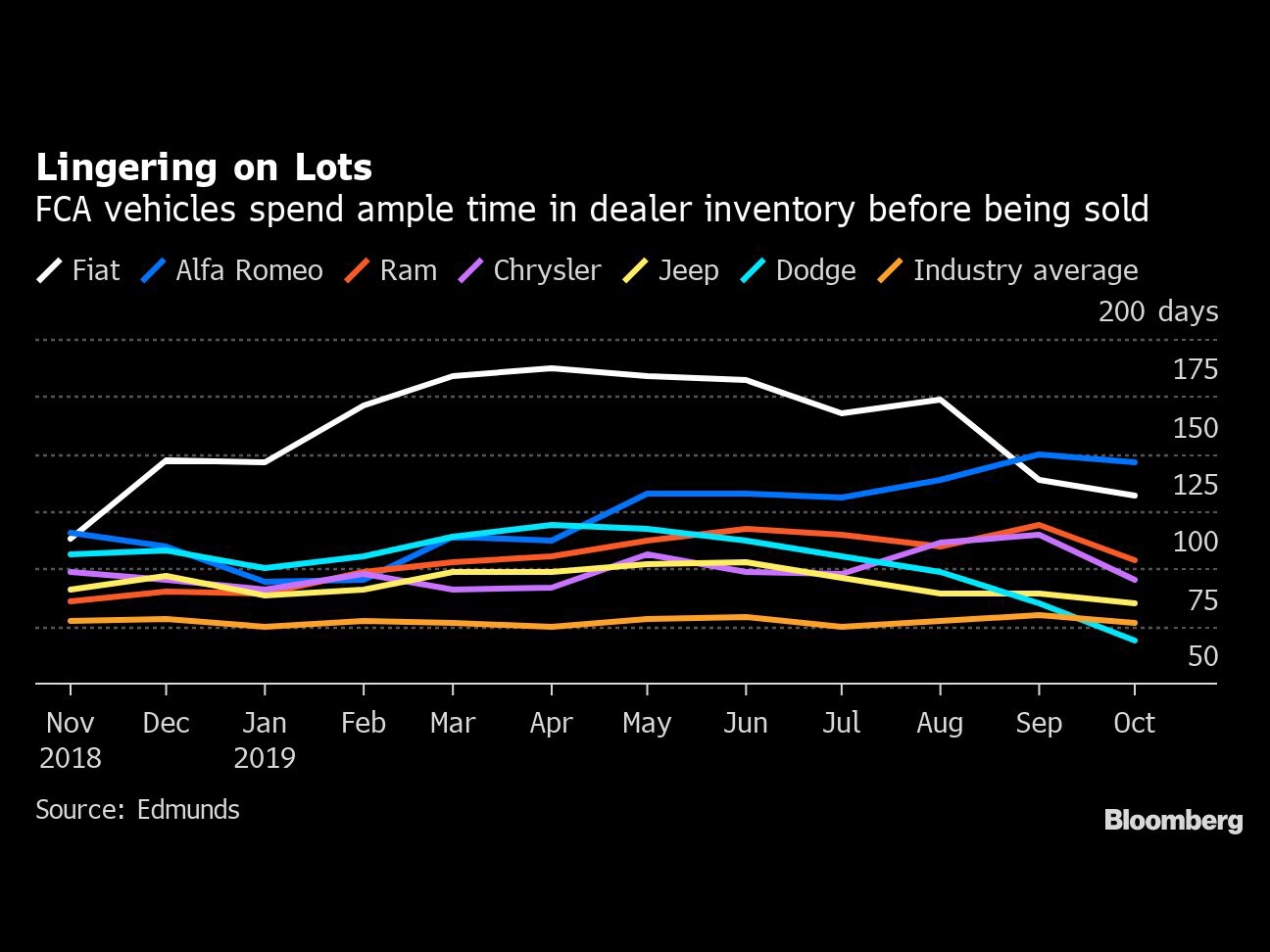 Fiat Chrysler Automobiles NV is making an all-out push to clear away tens of thousands of vehicles that its dealers haven’t ordered, adding to tensions over a new data-driven production strategy that can lead to swelling inventory.

The Italian-American automaker is offering its most aggressive discounts since the financial crisis to sell certain 2019 model-year cars under its Dodge, Jeep and Ram brands, internal marketing documents show. In a conference call this month, sales staff were asked to work overtime to press the company’s network of 2,400 dealers to take more vehicles and shrink the unassigned inventory to zero before Christmas.

For Fiat Chrysler, now in a merger deal with France’s PSA Group, the sales blitz marks a costly scramble after it accumulated a stock of as many as 70,000 unassigned cars for the month of December. The company says the build-up is the result of a year-old system to streamline manufacturing by using data analytics to forecast demand, which can cause supply to wax and wane. But it’s also leading to internal strains, with some employees expressing frustration that the cars produced don’t match market preferences, according to the conference call and people with knowledge of the matter.

The magnitude of discounts Fiat Chrysler is resorting to in order to coax dealers to take on the vehicles sends a troubling signal for the automaker’s most important region. Spending on incentives impinges on earnings, and the company is almost entirely reliant on the money it’s making in North America. The situation also shows the challenges carmakers face when adopting new technology to overhaul entrenched practices.

In a perfect world, auto companies manufacture only as many cars as the market is willing to absorb, based on dealer orders. If they make too many, they may ply consumers with incentives to move metal, or lay off factory workers and cut production; too few, and they can either raise prices, or ramp up output to meet demand. The problem is that cutting production means a lower return on the billions invested to produce a vehicle, so it’s often cheaper to overproduce and then use incentives to subsidize sales.

Four dealers told Bloomberg last month that they were being prodded to take cars from what they called a sales bank — a stock of vehicles the manufacturer built despite lacking orders for them from retailers. The decades-old practice is frowned upon in the industry because it can obscure supply figures and increase pressure on dealers to take vehicles they don’t want. Inventory numbers reported to third-party researchers only count cars on dealer lots.

Fiat Chrysler disputes that it’s operating a sales bank. It says the car build-up is a temporary side effect of the predictive analytics system, which saved the company 400 million euros ($445 million) through the third quarter, and trimmed 140,000 units from its total inventory. It was put in place by North America Chief Operating Officer Mark Stewart, who joined last year from Amazon.com Inc.

“Our new supply chain management strategy based on predictive analytics continues to work well for us, even as we continue to refine it,” said Niel Golightly, Fiat Chrysler’s global chief communications officer.

Fiat Chrysler’s stock of excess inventory can fluctuate. The company had a supply of 40,000 unassigned cars in the third quarter that eventually was whittled down to 5,000. The number swelled to 60,000 in November, and 70,000 in December, according to a person with knowledge of the matter, who asked not to be named because the figures are private. It was down to 25,800 vehicles last week.

In the internal marketing email last month, the company outlined new incentives to move “bank units.” Fiat Chrysler has been offering employee pricing that it’s touted as the most aggressive since 2008, shaving 5% off what the dealer pays, plus applying additional rebates to certain vehicles.

Employee pricing is “pretty rare” and was a big boost to sales in November, said Josh Towbin, co-owner of Towbin Automotive in Las Vegas. “It’s working for us, we like it a lot,” said Towbin, who added he hasn’t felt pressured to take unassigned cars.

Still, a Dec. 11 conference call with field sales staff revealed representatives in the automaker’s nine sales regions have been working overtime, including during the weekend, to urge dealers to take more cars and empty out the bank.

Several staff expressed frustration on the call that the vehicle configurations dictated by the analytics system don’t match market demand, undermining the company’s claims that its supply is based on software that predicts the most-wanted packages. For instance, the inventory includes 2019 heavy-duty Ram Bighorn trucks with 20-inch wheels that cost $1,600, while dealers want trucks with 18-inch wheels that come standard, one sales executive separately told Bloomberg.

Even dealers who do need fresh inventory aren’t willing to take vehicles from the bank because of the undesirable configurations, people said during the call.

“I know that not all the dealers are playing ball,” Mike Koval, U.S. director of Ram brand product marketing, said on the call. Of the 2,400 Fiat Chrysler dealerships in the U.S., more than 60% have refused to take more than five units in December, he said. “I don’t know what the magic formula is, but we need to work together to crack that code.”

Fiat Chrysler put a limit on dealer orders in December to instead work through existing cars in the sales bank, Bloomberg reported last month. Going forward, dealers will again be able to order cars from the plants, in tandem with production dictated by the analytics system, Koval said on the call. However, the surplus of cars is likely to continue.

“As we look forward to Q1 2020, it looks like there’s really no end in sight on this stuff,” he said. “This might be the new normal for a while.”