Over at Dick’s Sporting Goods, they use four words to guide distribution center operations:

Certainly, those are four powerful words when talking about fulfilling direct-to-store and direct-to-consumer orders. And, many DC technologies can help accomplish those four things. But perhaps the most often overlooked technology partner here is data capture from bar codes to voice and portable terminals, to name a few.

“Most companies have a narrow view of what data capture can do. Too often, they think of it just for identifying inventory and tracking it at various stages along the way,” explains Linda Grady, national accounts manager at Bastian Solutions. “People need to see a broader, bigger picture for data capture,” she continues.

And leaders, such as Dick’s, do just that. In fact, the value proposition for data capture today is broad.

At Lipari Foods, voice-directed picking increases productivity. And it does that, at least in part, by leveraging directions from the WMS, sending instructions to pickers in real time.

Apex Tool Group also uses voice. “Picking is the main driver of the DC,” says Chris Rufa, senior director of global distribution at Apex. Using voice, “the goal is to streamline the picking processes, reduce complexity, and improve accuracy while extending the life and functionality of the WMS,” he adds.

As these and others link data capture to broader operations, “the technologies are moving from being responsible for transactional visibility to constant visibility,” explains Mark Wheeler, director of supply chain solutions at Zebra Technologies. “But we’re only about 15% of the way there,” he adds.

Needless to say, making the move from transactional to constant visibility is complicated and requires quite a bit of planning. “Basically, you have to decide upfront why you are collecting the data and what you are going to do with it,” says Grady.

Dan Gilmore, vice president of marketing at Softeon, adds that these early decisions “drive data flow to the right places and directly affect communications across the facility and even beyond. What you don’t want to do is send data and messages to systems that don’t need the information in the first place. All that will do is slow overall response time and bog down the system.”

For a long time, the data capture technology decisions from bar codes to radio frequency identification (RFID) were focused on the easiest way for workers to physically collect data. For instance, is it easier for a worker to use a ring scanner to read a bar code or to follow voice commands? But, more is going on here right now.

As you might expect, product developments continue unabated. One example is Honeywell’s FlexRange, an eighth-generation imager that captures bar codes up close and at distances to 35 feet. Another is Zebra’s RS 5100 single-finger ring scanner for reading one- and two-dimensional bar codes.

These and other product advances are still important because they continue to streamline data capture itself. However, “in many cases, how the data is collected is a secondary consideration to the system’s need for many different types and sources of data,” says Justin Ritter, director of project operations at Lucas. As he points out, it’s not uncommon to have a mix of data capture technologies in a single DC streaming data to those key points that Gilmore spoke of. 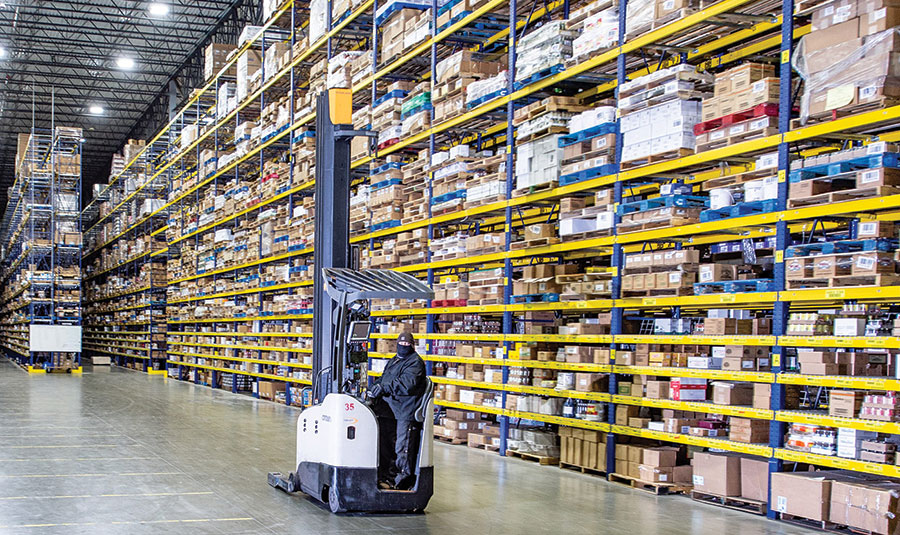 At Lipari Foods, voice systems direct all case and each picking in ambient, refrigerated and freezer sections.

An example of that is voice middleware. According to Gary Glessner, vice president of sales and marketing at Speech Interface Design, voice middleware can act as a WMS light, providing grouping and batching of inventory for efficient picking. “In other words, voice, in this instance, provides both visibility and control, improving productivity in the picking process,” Glessner says.

He continues that Lipari Foods uses voice to direct all of its case and each picking in the ambient temperature, refrigerated and freezer sections of its DC. But when changes to the business dramatically increased its SKU count, they were forced to co-mingle products within pick faces that had previously been the home to single products. Lipari added a bar code scan of each picked product to its voice-directed process to ensure accuracy.

Voice directs picks to totes/carts, case pick and man-up picks. However, bar code scanning is much more effective at determining the worker’s location because the bar code must be scanned, ensuring 100% location verification.

At Apex Tool Group, voice improved productivity, slashed picking errors and led to dramatic savings in retailer-imposed fines for shipping errors, explains Ritter at Lucas. In the new system, the WMS sends orders to a work execution server and the middleware manages the creation and release of work assignments across the DC.

Another benefit, says Ritter, is the ability to provide real-time performance data by individual worker. The information is also valuable to supervisors. “This allows people to know how they are doing against standards. But it also offers supervisors predictive insights into staffing levels and work completion goals, allowing them to make adjustments to maximize inventory flow through the DC.”

This brings us to the epicenter of data capture’s value to DCs today. Besides collecting transactional data, these technologies also feed data to various systems that monitor processes, people and assets. It’s all about collecting more knowledge about and adding structure to DC operations even as they become less structured due to ever-changing customer requirements. It’s a never-ending battle.

Even the data capture equipment itself is being closely monitored these days, says Smith. Honeywell software, known as Operational Intelligence, collects data about the devices themselves and monitors their condition. This ensures they are operationally effective continuously, helping to keep processes efficient.

A single-finger ring scanner reads one- and two-dimensional bar codes throughout the warehouse.

“This is a process that until now has been basically invisible to everyone except those doing the trailer loading. Now there is hard data about loading processes and efficiencies, opening the door to process improvement that affect both shipments from the DC and unloading at the other end,” explains Wheeler.

There’s also the matter of tracking people in the DC. Softeon’s Gilmore talks about Visual Warehouse software tied to a WMS that puts a two-dimensional rendering of the DC layout on a screen. Workers wear a tracking device that identifies their location and activities using either Wi-Fi or Bluetooth.

The software allows analysis of worker activities and processes. Are they taking the most efficient pick path? Is there excessive dwell time at any location? Do workers wander outside of the pick zone? The answers to those and many other process questions facilitate improvements in pick activities and worker behavior in the DC, explains Gilmore.

The tracking devices, he continues, can also be used to pair an individual with an autonomous mobile robot or a picker with a cart in a pick-to-light area. The point, says Gilmore, is to ensure the right person is performing the expected picking function and delivering items to the appropriate robot or cart.

Honeywell’s Smith describes a similar Wi-Fi or Bluetooth beacon that identifies the location of the person to within 30 centimeters. The idea here is to more efficiently route workers through the DC. Smith says this is at the proof-of-concept stage right now.

All of which leads us to the early stages of traditional data capture technologies becoming part of the Internet of Things (IoT) in DCs.

Bastian’s Grady says the concept is beginning to get some traction inside the four walls and even outside of them. Clearly, the foundation is being built with all that is being done to improve processes and better deploy people in real time.

The next stage, says Grady, is to use many different types of sensors to track shipments outside the four walls. It’s all part of the evolution of data capture from providing transactional visibility to constant visibility.

Companies mentioned in this article:

Get news, papers, media & research, delivered.
Stay up-to-date with news and resources you need to do your job. Research industry trends, compare companies and get market intelligence every week with Supply Chain 24/7.
Subscribe to our email newsletter and we’ll keep you up-to-date.