Digitizing Transportation Processes: A Win/Win for Shippers and Carriers | 2019-12-06 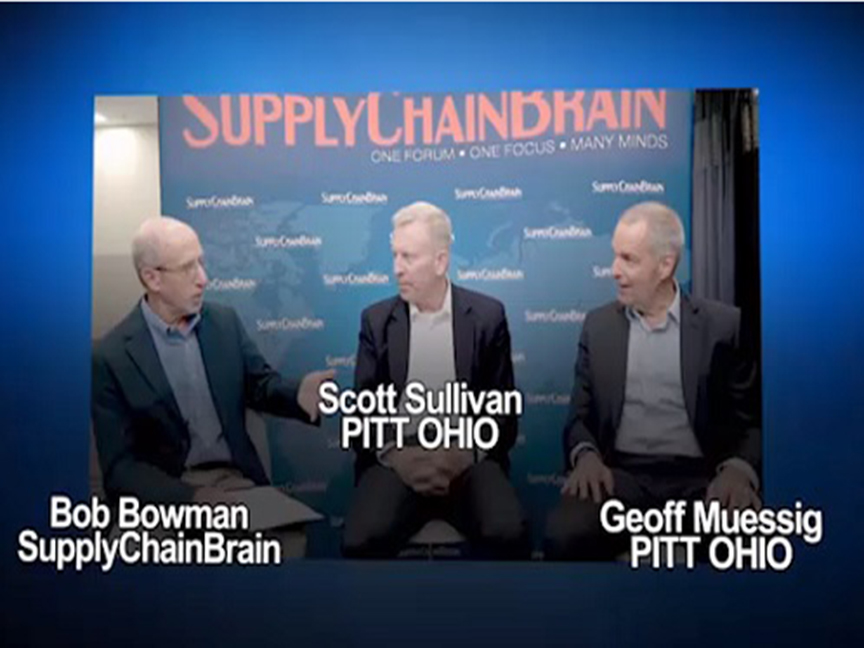 Just what is supply-chain “digitization” anyway? And how far along are transportation companies in adapting to it? Two Pitt Ohio executives — chief financial officer and chief information officer Scott Sullivan, and chief marketing officer and executive VP Geoff Muessig, engage in a lively discussion about the promise and reality of the digital supply chain. A SupplyChainBrain Power Lunch Roundtable presentation.

SCB: What’s your definition of the word “digitization”?

Muessig: It relates back to the intent of shippers to create a seamless supply chain. They want end-to-end visibility of their product flow into the plant, the distribution center, to the customer, and for returns. So how do we accomplish that? So many shipments and products move on paper bills of lading. There’s an intent out there to move a to digital format, so there’s greater visibility and speed of transmission. That’s where digitization comes into the supply-chain conversation.

Sullivan: I agree with that. A lot of it has to do with the evolution of technology in the business world. Back in the 2000s, we all had big PCs and really loved them. Phones today are more powerful than PCs were a decade ago, and modern technology is involved with cloud computing, Making information available to all parties within the supply chain has become a very important part of digitization. It’s about bringing information together and making it available not only for your internal use, but for external customers as well.

SCB: To what degree are shippers today embracing digitization in their relationships with carriers?

Muessig: There’s avid interest in getting status updates on shipments in digital format. They want speed of information, and to able to broadcast it to many people inside their company. But when they’re tendering shipments to a carrier, you see a break in the digital supply chain. All a sudden they revert to a piece of paper, creating a paper bill of lading and handing it off to the carrier, who then has to transpose that information and digitize it again to execute the shipment.

Sullivan: Digital is a key buzzword nowadays. In reality, though, we’ve been betting on this strategy for the last 10 or 15 years. Telematics has become available in trucks. That’s the first part of digitization, being able to communicate with the driver in real time. We’ve used digitization to deliver more value to the customer and provide them with status updates in real time.

SCB: So where do you go from here?

Sullivan: The question is, how do we fix the gaps? We’ve had a vision to become a virtual transportation company. To me, that’s digitization. We want to be able to interact with our customers. They don’t have to make a phone call. They can log onto their computer or use their phone to get the information they need to track their shipments.

SCB: And yet a number of shippers are still lagging in their relationships with carriers. Is it a question of prioritizing IT projects, or just not understanding the benefits of digitization?

Muessig: I think carriers haven’t done a good enough job of explaining the benefits of getting digital bills of lading. One is an improvement in accuracy, in that you’re not transposing numbers and routing a shipping to the wrong place. You can automate your back-office process and take cost out that way. But probably the biggest benefit is from a planning standpoint. Oftentimes a shipment is packed and ready to go at 10 o’clock in the morning. The bill of lading could be transmitted electronically at that time, and the carrier could use the information to plan its linehaul operation that night, six hours before making the pickup. In our present world, for 10,000 out of 14,000 shipments that we pick up every day, we’re getting the information around six o’clock at night, when our drivers bring the paper bills back to our terminal. There’s a real bottom-line impact to Pitt Ohio getting this information earlier. And we’re willing to gain-share that with our customers in the form of reduced freight rates.

SCB: What percentage of your customers actually do this digitally?

Sullivan: It varies by what you’re offering. As soon as we started tracking our shipments on a real-time basis and communicating that out, customers had to sign up for a feature called proactive notification. And guess what? We were telling them too much. They want to be selective about when they’re getting information. So we put an initiative in place to do electronic invoicing. That’s a form of digitization, too. Within a year, we had 90% of our customers signed up for it.

SCB: How about digital bills of lading?

Sullivan: That’s where we still struggle. We’re trying to get customers to give us the information electronically for all the reasons that Geoff discussed. But we’re only at about a 10% to 15% adoption rate. Out of that, probably 5% of the bills come across digitally. So we’ve got a lot of work to do there, not only from a customer side but also from a carrier side.

Muessig: Shippers are very receptive to consuming digital information. The paradigm shift needs to be for information they share back in return. It’s not the shippers’ fault; it’s that carriers haven’t done a good enough job of asking as an industry. We need to get out there and make the point that this is a better way to do business moving forward.

Sullivan: The whole subject of e-bills of lading is ripe territory for both shippers and carriers. There’s so much efficiency to be gained on both sides of the equation. When we get a paper document, until we get someone to key that into the system, we can’t provide you with any information. But if they send it to us digitally, as soon we receive it we can tell them,” We got it. We’re doing your pickup. And pickup’s completed.”

SCB: How much of it has to do with whether a shipper has a transportation-management software [TMS] system? Does that make a lot of difference in their ability to go digital?

Muessig: It’s the most obvious way to engage in the conversation, and exchange information digitally. But oftentimes the TMS is used only to consume information, and the ability to forward an electronic bill of lading either isn’t turned on, or isn’t even in older TMS models.

Sullivan: As the technology continues to evolve, it becomes easier to communicate updates back and forth. In fairness to shippers, their business can change during the day. What they thought they had at noon actually isn’t available until three o’clock. So they’re a little hesitant about sending that information out. But the more information we can get upfront, the less back-office processing we have to do, and the sooner we can get it into the system.

SCB: The number of shippers who actually have a TMS is pretty low, right?

Muessig: It’s somewhere around a third in the marketplace. But if you look at it from a numbers standpoint, it’s probably more than 50% of bills.

SCB: So are shippers waking up to the benefits of a TMS, and the digitization of their bills of lading?

Sullivan: I think they’re waking up to the value of a TMS. I don’t think they’re there yet on digital bills of lading. I’m not really sure why — it just seems to be a piece of the puzzle. If there’s one gap in the digital supply chain for transportation, it’s the bill of lading. It starts the whole shipping process.

SCB: They have to prioritize their IT investments, based on what they consider to be of value.

Muessig: Absolutely. And that’s the intent of our conversation — to create awareness that digital bills of lading can help shippers reduce their transportation costs over the long term.

Sullivan: It’s done in the business-to-consumer world all the time. You place an order, you never talk to a soul, you track the order online, and you get it delivered. Why can’t it happen in the B2B world? That’s where we want to go in the carrier-shipper relationship.

Muessig: We talk about creating the virtual transportation company, to manage things like shipment-status updates. But there are gaps in our conversations with customers around exception reporting — explaining that a shipment isn’t going to delayed until tomorrow. We’re working on creating that capability to make the shipper aware of it. Just this past year we began offering last-mile updates, which allow the shipper or its customer to track the shipment in the last hours before delivery, and get an ETA down to the minute.

Sullivan: In all fairness to the shippers, we’re one of many carriers they’re using, so if they’re getting this information from everyone, they just want the exception reporting. “Tell me when it’s not going to work.”

SCB: No one’s sitting in front of a screen tracking the progress of their freight mile by mile. They don’t have the time, capability or the desire to do that.

Sullivan: Right. But with APIs [application programming interfaces], it’s pretty cool technology. We have a customer where we’re feeding them statuses as soon as we update our own. They know everything we know, and so does the customer-service agent. When a customer calls in and wants to know where their shipment is at, they don’t want to be put on hold, or have to go to our website and check it. They want it in their system. That’s the direction we want to go long-term, to be able to integrate the carrier’s data into the shipper’s data.

SCB: In an ideal world, no one should have to be calling anyone. You should be able to access that information digitally.

Muessig: Except for escalated issues. There are always exceptions. That’s the nature of transportation.

SCB: Do you think this is the state of the art with carriers in general these days?

Muessig: I think the marketplace is disparate. We might be more on the cutting edge in terms of using technology to take cost out, but the truth of the matter is that a digital bill of lading is extendable to many carriers in our industry. If a shipper can achieve better pricing with Pitt Ohio by offering us a digital bill of lading, they’ll be able to do the same with our competitors.

Sullivan: It’s always a catch-up game. But we continue to move toward the digital bill of lading, which can close the biggest gap in the shipper-carrier relationship. The good news is that the industry’s starting to talk about it a lot more. We’re making progress.