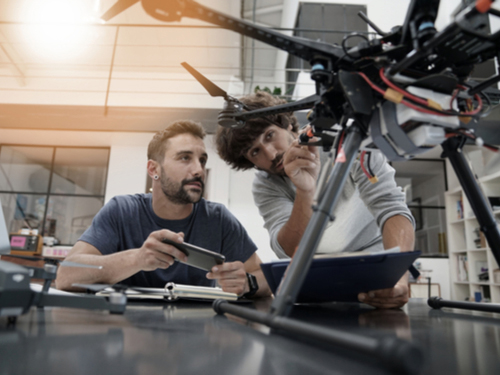 New commercial drone businesses flooded into the market at the start of the decade, flush with venture capital and giddy with visions of unmanned aircraft being used for everything from delivering packages to fertilizing farmland.

Unmanned aircraft are still seen as a pillar of the future. But for now, all that over-heated enthusiasm is getting a cold blast of reality.

Some of the biggest startups began closing their doors last year after burning through hundreds of millions in venture capital poured into a fledgling industry that, despite forecasts for explosive growth, is taking longer to mature than expected. Dozens of others are getting swept up in a consolidation wave as drone companies search for a profitable niche in a rapidly shifting marketplace.

“There was some irrationality around drones, a period of hype driven by the popularity of the hobby sector,” said Kay Wackwitz, founder and chief executive officer of research group Drone Industry Insights. “We’re getting past that and people are coming back to reality.”

Once well-funded startups are struggling as hordes of self-employed pilots drive down prices, Chinese technology races ahead and non-drone companies across industry pull their unmanned aerial operations in-house. Federal regulation of the aircraft has been slow to catch up, and is holding back many businesses from expanding.

French manufacturer Parrot SA announced in July that it would halt production of most of its drone lines. Software startup Airware Inc. raised $118 million from investors before shutting its doors and laying off 140 employees in late 2018. GoPro Inc. exited the drone business and laid off hundreds last year, citing an “extremely competitive” market.

But while some startups are testing investor patience, others are seeing an opportunity for growth. At least 67 drone startups have been sold since their inception, according to Crunchbase, which collects data on private companies. Buyers range from rival drone operators to companies in other industries, such as Verizon Communications Inc.

The shake-up is altering the U.S. landscape, which quickly shifted from an emphasis on hardware and manufacturing in the early days, to one providing software and services, such as detailed inspection and data-analysis. Now, it’s larger service companies offering a kind of soup-to-nuts menu that are best positioned for the future, providing the drones, flying the missions and then analyzing the data for customers.

PrecisionHawk Inc., an industry leader in drone services such as inspection and data analysis, said it acquired five startups in 2018. These include Uplift Data Partners, which performs construction and real estate inspections; HAZON Inc., specializing in energy; and Droners.io, an online network of independent drone pilots.

Venture capitalists poured $2.6 billion into drones from the beginning of 2012 to June 2019, according to Teal Group, an industry researcher. The rapture began to evaporate last year as startups founded during ‘peak hype’ in the commercial drone industry ran out of money before they could generate profit and couldn’t secure additional funding, said Wackwitz.

At least 25 drone startups have shut their doors this decade, with the largest burning through a total of $183 million in funding, according to Crunchbase’s online reports.

“The venture capitalists are less enthused now,” said Dan Burton, CEO of Dronebase, a drone pilot network that’s held on through the turmoil.

A drone venture with backing from Kleiner Perkins and Google’s GV shut down last year. On a smaller scale, a company called CyPhy Works offers another cautionary tale.

Helen Greiner, known for developing the Roomba robot vacuum cleaner, founded CyPhy in 2008 to develop a drone tethered to a grounded power source that could fly for days at a time for observation and communication. But investors pressured her to begin commercial sales before she was ready, she said in an interview. She stepped down as CEO, then left the company in late 2018 to take a job advising the U.S. Army on drones.

At the start of the year, CyPhy announced it would change its name to Aria Insights and transition from hardware to drone data analysis software. In March, after plowing through $39 million of venture capital, the company shut down.

“Whether it’s supply chain issues or regulations, there will be delays along the way with startups,” Greiner said. “It’s important to find VCs who are founder friendly, that know they’re placing a bet on you and keep the support.”

As the industry begins to sift out the most lucrative business plans, survival tactics include shifting the focus of the company, including its targeted customers.

Airware, the highest-funded startup to go under, initially developed cloud-based software and autopilot systems for drones. One early proposal was to fly over farmland collecting data on the status of crops, from moisture levels in fields to how much crops were being affected by pests and chemicals used to control them.

But most farmers aren’t yet equipped to make use of that kind of information, said Wackwitz. That early interest in precision agriculture dimmed, forcing Airware to pivot to other applications, like consulting companies on drone use, before shutting down in September.

Fast-evolving technology has been both a curse and boon to entrepreneurs. While it’s broadening the business possibilities as drones are designed to do more than just take video, other ventures and jobs are already being made obsolete by improving navigation and flight software. Meanwhile, companies, such as Intel Corp. and AT&T Inc. have begun their own drone operations, cutting out the middleman.

Executives at drone startups report less enthusiasm about the industry than they did a year ago, a 2019 survey from research group Drone Industry Insights shows. But even those who’ve felt the pain of the shakeout still see plenty of upside as companies hone their business models, regulation provides more flexibility and advancing technology equips drones with greater abilities.

Investor money is still flowing into commercial drone companies, but it’s increasingly going to a handful of winners in the industry. PrecisionHawk secured an additional $75 million in funding last year from backers including Comcast, DuPont Ventures, and Verizon Ventures.

“It takes time, innovation, long-term founders and long-term investors for startups to be successful,” said Greiner, the erstwhile founder of CyPhy. “I honestly believe we’re at the tip of the iceberg for drone applications.”