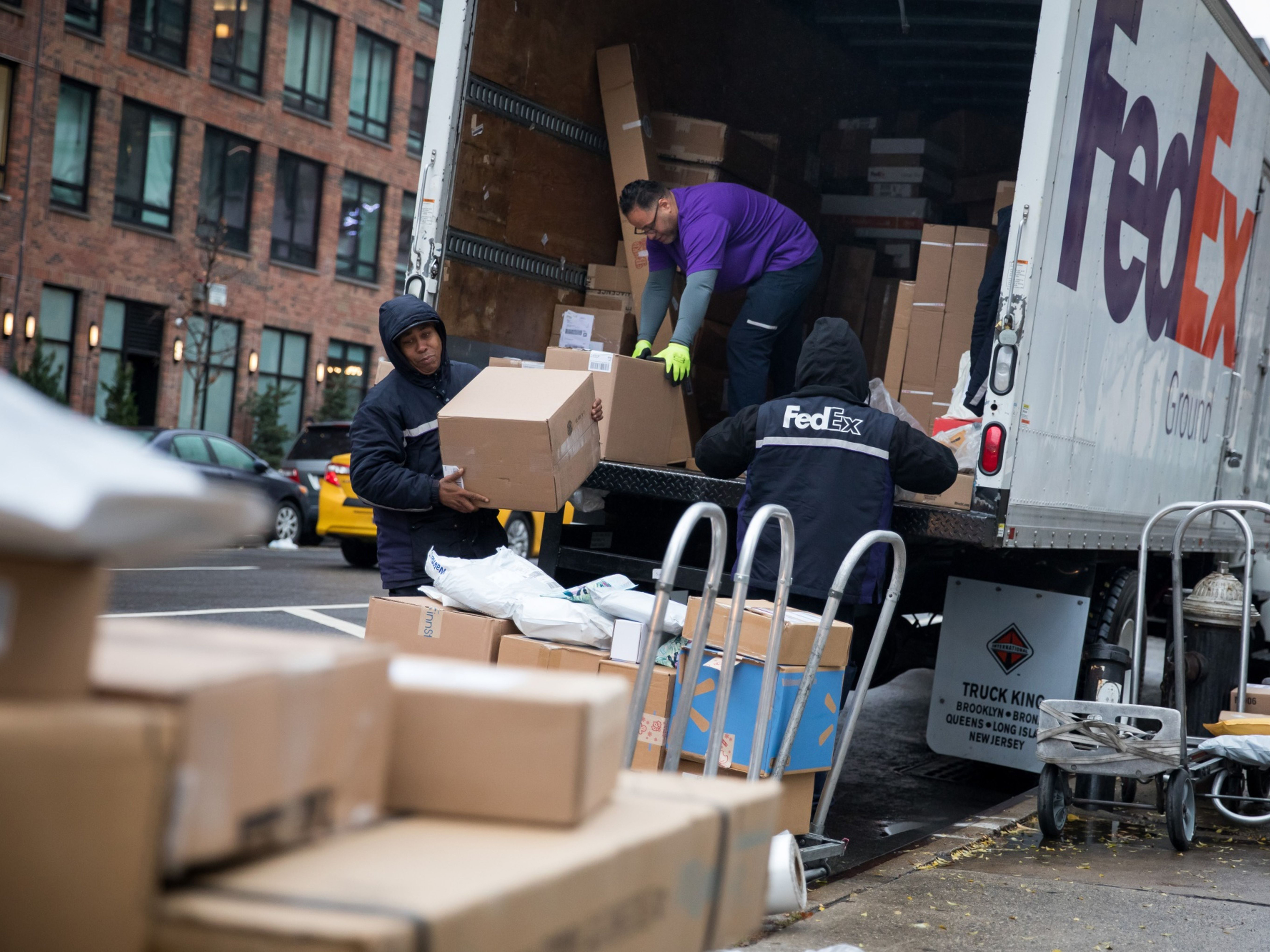 Best known for disrupting the parcel delivery business by introducing overnight service, Smith is now getting disrupted himself by e-commerce and the rise of online shopping. He’s taking a pounding from Wall Street for FedEx’s disappointing performance, while analysts praise archrival United Parcel Service Inc. for reversing a decline in profit margins.

Smith is frustrated, defiant, indignant by turn. But most of all he’s confident — as he asserted more than 20 times during a two-hour interview in which he laid out his strategy to master e-commerce and become the fastest, most cost-efficient ground courier. He’s drawing the battle lines, positioning FedEx as a kind of anti-Amazon ally for big-box retailers and pledging that his strategy will soon enable FedEx to overtake UPS.

“I will say to you unequivocally: In the next two or three years, I’m firmly of the belief we will pass UPS in terms of size and be the largest by-revenue transportation and logistics” company, Smith said.

The 75-year-old founder and chief executive officer is the first to admit his plans haven’t gone smoothly. FedEx’s international business has been plagued by setbacks, including a 2017 cyber attack and a costly air-fleet expansion that was undercut by Donald Trump’s trade wars. Back home, a falling out with Amazon.com Inc. drained $900 million off the courier’s top line.

FedEx investors have paid the price. After the shares of both couriers tumbled in 2018, UPS shares gained 20% last year, while FedEx slumped 6.3%. A string of earnings disappointments have driven down FedEx by 43% in two years.

But Smith is nothing if not battle-hardened. The Yale-educated former Marine has been shot at in the jungles of Vietnam and almost bankrupted his family fortune to create an unprecedented express delivery market. He built FedEx while overcoming the 1970s Arab oil embargo, two Middle East wars that stalled growth, as well as the 2008 economic meltdown.

“I’ve been through this before, getting smacked when bad things happened in the middle of building things,” Smith said in an interview late last month. “I mean, this is kind of the story of my life.”

As the CEO enters his 47th year at the helm, he’s driven more than ever to get his vision across to investors and bring FedEx back on solid footing before stepping down — a prospect he’s now contemplating.

While acknowledging that the company isn’t making as much money as he’d like, Smith promises by mid-year it will be clear that his plan is working.

The two biggest parcel delivery companies in North America are forging dramatically different paths as they adjust their business models to the tsunami of e-commerce. Their success will help decide the market war between Amazon and Walmart Inc., and perhaps the future course of the entire retail industry.

While UPS is deepening its ties to Amazon, FedEx has broken away, instead working to strengthen its relationship with brick-and-mortar retailers to help them win at e-commerce. While UPS wants to stay neutral with customers, Smith is banking on an us-against-Amazon mentality.

“I have this completely iconoclastic — it’s not a belief, it’s a certainty — they are going to disrupt Amazon,” Smith said of traditional retailers. “We came to this fork in the road that we had to ally with one side or the other. They want to become more adept in the e-commerce space, and we intend to allow them to do that.”

Another difference is that UPS is relying more on the U.S. Postal Service, especially for Sunday deliveries, while FedEx is taking back about 2 million packages a day that it had been handing off to the government agency for final delivery. With the increased volume, FedEx can better leverage its more than 600 sorting and delivery facilities around the U.S. to help retailers with shipments from stores to residences.

Skeptical analysts like Morgan Stanley’s Ravi Shanker aren’t sure that ramping up volume in short-haul deliveries will produce the kind of returns Smith seeks.

“He’s trying to put as many boxes through his network as he possibly can and it’s hard to debate that approach as long as he can demonstrate viable returns and improving profitability,” Shanker said. “I think the jury is going to be out until they actually deliver that.”

The push to catch UPS has come at a cost. Since 1995, FedEx’s capital spending has been 9% of sales on average, compared with less than 6% at UPS, according to data compiled by Bloomberg. In the past decade, FedEx’s average return on invested capital has been 13%, well below its rival’s 24%.

FedEx’s ground unit — started two decades ago to counter UPS’s venture into overnight service — has become the crown jewel of Smith’s company. Revenue almost tripled in the last decade, compared with a 75% increase at its Express air cargo business. Profit margins averaged 15% for ground compared with 5.6% for Express. The unit has gained U.S. market share in 19 of the last 20 years, Smith said.

A sharpened ground service is a crucial part of FedEx’s strategy in teaming with traditional retailers. To compete on e-commerce, big retailers like Wal-Mart, Target Corp. and Dick’s Sporting Goods Inc. have improved technology to track merchandise, and to pick, pack and ship from local stores.

Retailers’ thousands of neighborhood stores, coupled with FedEx’s network of delivery facilities, should provide an edge over Amazon, which has many fewer facilities and must use aircraft to fly in goods not on hand at fulfillment centers.

“We already know how to do this,” said Smith, who notes that more than 90% of the U.S. population is within five miles of a FedEx facility. “That’s why we say with such confidence that we can do it and be the low-cost, high-service provider.”

The CEO sees FedEx moving beyond its rough patch this year as the swell of spending subsides and growth makes up for the lost Amazon business. FedEx predicts profit margins in its ground unit will rebound into the teens by the quarter ending in May, after they dropped to 9% for the six months through November.

Smith’s confidence isn’t shaken by the recent avalanche of criticism, in part because he says analysts and competitors don’t have all the internal data that he has to show why his plan will work.

“Take your best shot,” he said of his critics. “We’ll see who wins in the end here.”