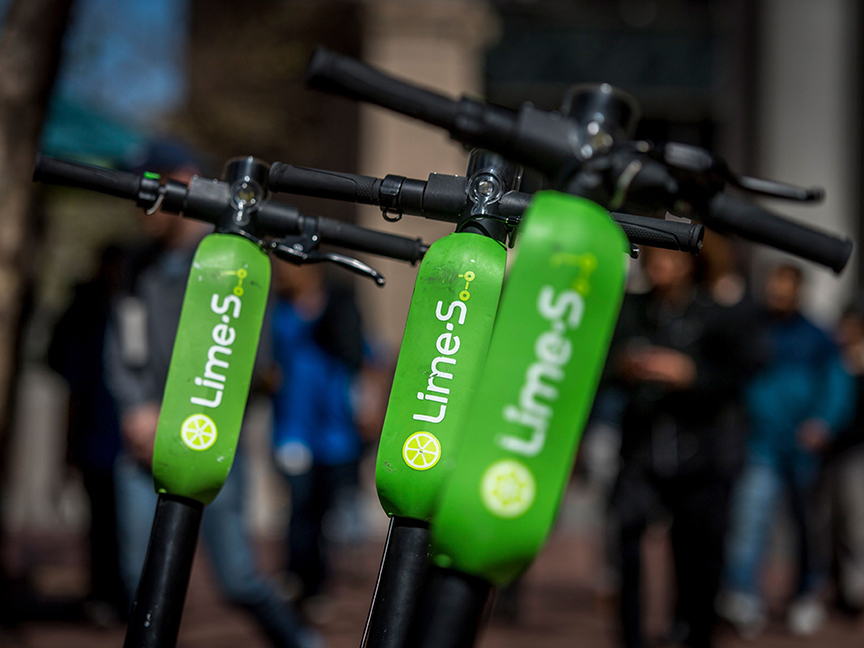 The scooter-sharing service Lime warned the U.S. government earlier this year of an existential threat to its business. Paying new tariffs on Chinese vehicles would require Lime either to absorb significant new costs, charge customers more or fundamentally reshape its supply chain, the company argued in an official request for an exemption. Choosing any of these options would “stunt Lime’s growth and threaten the survival of its existing services.”

Over the last two years, a wave of scooter-sharing companies have emerged, based on the belief that American urbanites are hungry for alternatives to car travel. Their business models also relied on another assumption: that they’d always be able to import large numbers of low-cost vehicles from China. For the San Francisco-based Lime, the Chinese connections ran particularly deep. Brad Bao and Toby Sun, its co-founders, were both born in China, and they sold the startup to investors as a company that maintained a foot in their home country. Having two Chinese founders “who had the relationships, and can set up that operation quickly, was a real advantage,” said Joe Kraus, who invested in Lime in 2018 as a partner at GV, then became Lime’s chief operating officer four months later.

President Donald Trump’s aggressive trade policies complicate that story. Countless American companies find themselves stuck in the middle of the competition between the U.S. and China. Companies have filed about 44,000 requests for tariff exemptions, and about 5,000 have been approved. The U.S. Trade Representative rejected Lime’s request, along with similar ones from Bird Rides Inc. and Uber Technologies Inc.

Scooter imports from China to the U.S. this year total nearly $300 million, according to research compiled for Bloomberg by IHS Markit’s Global Trade Atlas. This puts the importers on the hook for about $74 million in tariffs, a significant added expense for the money-bleeding startups that dominate the scooter industry.

Lime has raised almost $800 million since its founding in 2017, and investors valued the company at $2.4 billion in its most recent funding round this February. It is close to completing another round of investment that will add hundreds of millions of dollars to its coffers, according to an investor who did not want to be identified discussing private fundraising plans.

Bao, who has been Lime’s CEO since May, was more sanguine about trade issues in a recent interview than the company was in its filing earlier this year. “We are not getting unnecessarily nervous,” he said, adding that Lime could be profitable as soon as next year. The company’s calculations rely on improvements to the durability of its vehicles, which Lime attributes largely to its manufacturing expertise. When asked what would happen if Chinese manufacturing receded as a viable option, Bao waved the idea off. “That doesn’t come to our mind,” he said.

Yet Lime has already begun to take steps to relieve its exposure to tariffs. The startup imported over 30,000 vehicles in the months before the first round of tariffs went into effect last August, according to Steve Ferreira, CEO of Ocean Audit, which tracks the global movement of goods. Lime’s imports since that time amount to, as Ferreira puts it, “almost zilch.”

Like many companies caught up in the trade war, Lime at times had trouble navigating the new landscape. Last year the company, along with a consultant it had hired, misclassified Lime’s scooter imports in a way that resulted in it not paying higher tariffs even after they were implemented, according to three people familiar with the matter. Lime executives later uncovered the practice, and told the government, paying for the tariffs it had avoided. The case is now closed, according to a company spokeswoman.

Lime is now considering moving some manufacturing out of China and into Southeast Asia, according to a person familiar with the matter who wasn’t authorized to speak publicly. Kraus described relocating manufacturing capabilities as one of many options the company has to mitigate trade-related risks but declined to say whether it has already begun doing so. “We’ve got plans in place, whether it’s short, mid or long-term,” he said. A spokeswoman later said the company hasn’t moved any operations out of China.

Lime’s Chinese connections are a key part of its culture, said people who work there. At its Redwood City, California, office, some employees greet one another and chat in Mandarin. Shelves of scooter helmets clutter the hallways, along with stacks of dried seaweed snacks, and individual packs of Nongshim Shin instant ramen. In the parking lot on a recent Friday afternoon, a man in a Lime helmet waved goodbye and yelled out “zaijian” to his colleagues as he scooted away. Lime likes to see itself as hard-charging even by the standards of tech startups. “As a Chinese company, they move fast,” said Christine Chang, who was senior manager of Lime’s logistics and supply chain operation until this summer. Speaking alternately in Mandarin and English in a recent interview, she said she was drawn to the company because of its Chinese-born founders and Chinese-speaking staff.

Bao switches between downplaying and celebrating Lime’s ties to China. “We are born and bred in the U.S.,” he said, pointing out that Lime was founded in California. A few minutes later he argued that Lime was better prepared than its competitors to navigate sensitive international relationships. His Chinese upbringing, he said, “does really help with that.”

Bao traces his own entrepreneurship to an ill-fated attempt to sell Nirvana T-shirts on the streets of Wuhan, China, when he was 14. It was the early 1990s, and the band was at the peak of its prominence. Yet, Chinese teenagers didn’t wear band shirts, opting instead for plain t-shirts. The business flopped. The lesson Bao took away, he said, was not to get too far ahead of the market.

Bao, 44, moved to the U.S. in 2003 to attend Berkeley’s business school. After graduating, he joined Tencent Holdings Ltd., as the general manager of its U.S. operation. The job came with a $48,000 annual salary and no equity in the company, which is now worth $400 billion. After a stint as an investor, he started Lime in January 2017 with Sun, who he knew through a B-school alumni group.

The two men were fixated on the growing Chinese trend of bike-sharing, where companies blanketed city streets with vehicles and let people unlock them with smartphone apps. They thought it’d work in the U.S. There was more interest for bike-sharing than there had been for Nirvana t-shirts in 1990s China, but not much more. Lime only began to look like a huge hit when it added scooters following the sudden success of Bird in late 2017.

In the U.S., the main distinctions between Lime and Bird’s product offerings are the color schemes. When Bird and other rivals first launched their scooter-sharing businesses, they used off-the-shelf vehicles, adding their own software and branding. But Lime has always claimed a more sophisticated supply chain operation than its rivals.

From the onset, it maintained operations in both China and the U.S. Its business in Shenzhen is run by Adam Zhang, who is described within the company as its third founder. Zhang, who was previously CEO of a Beijing-based e-bike company, is responsible for leading Lime’s Shenzhen team in hardware design, production and supply chain management, according to his LinkedIn profile. About 90 of the company’s 750 employees are currently based in China. The decision to invest in a full-time Asia operation, led by a local manager who understood the complexities of hardware and supply chain operations, was critical to their strategy, said Connie Chan, general partner at Andreessen Horowitz, an early Lime investor.

Through its wide network of Chinese manufacturers, Lime was able to seek deeper control from day one, according to Bo Hu, its director of engineering. The company sourced components from various suppliers — a battery from one factory, a controller from another, a motor from a third, said Hu. The custom-made scooters are intended both to develop vehicles with Lime-specific features, and to build longer-lasting vehicles, because the rate of deterioration is one of the major factors determining the economic viability of scooter-sharing companies. “In order to get your vehicles to last a long time, you have to build them from scratch,” said Kraus. (Bird now says it also works with multiple partners to make custom vehicles for its service.)

Lime’s manufacturing record hasn’t been spotless. Last year it pulled about 2,000 vehicles from the streets after some began to smolder or even catch fire. The company blamed manufacturing problems related to the battery used by Segway Ninebot, one of its suppliers. Segway Ninebot accused Lime of not properly maintaining its fleet. The two companies stopped working together shortly thereafter.

Lime currently works with at least three Chinese manufacturers, including Dong Guan Honglin Industrial Co., according to two people with direct knowledge of Lime’s operations. Replacing these relationships with new ones outside of China would come with at least short-term spikes in cost, according to Chang, the former supply chain manager. Even if Lime did move manufacturing facilities to a country like Vietnam, it would likely have to ship raw materials from China, or source locally. Lime would also lose the benefit of its experience in China. “When you go to another country, they have a lot of quality issues, manufacturing issues,” said Chang.

Lime’s decision to stock up ahead of the tariffs is also leading to a new liability in the coming months. The company maintains at least a dozen warehouses across the U.S., where it keeps unused vehicles overnight, or for longer stints, according to Chang. At times there have been tens of thousands of scooters sitting in storage, according to two people familiar with the company. Storage capacity can be stretched in the winter in cold-weather cities, when many of Lime’s scooters enter a state of semi-hibernation. All those tariff-free scooters Lime bought in last year will have to go somewhere, and warehouse space isn’t free.