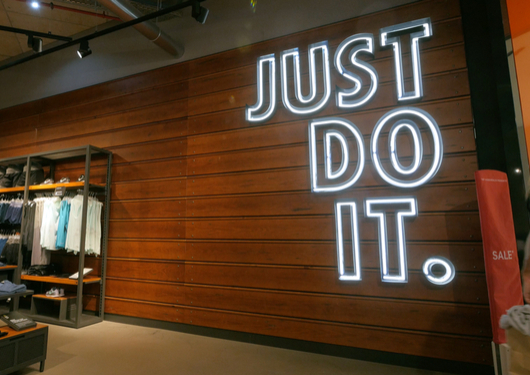 After turning e-commerce and apps into a centerpiece of its operations, Nike Inc. is taking the next logical step: hiring a tech CEO.

The athletic brand tapped former EBay Inc. head John Donahoe to replace Chief Executive Officer Mark Parker next year in the biggest sign yet that Nike wants to be seen as a technology business. Like Starbucks Corp., which hired a Silicon Valley veteran as CEO in recent years, Nike is joining a parade of retail companies remaking their image.

“Everything is going digital,” Bloomberg Intelligence analyst Poonam Goyal said on Bloomberg Television. “He has a lot of technology experience, which for retail today is key.”

Donahoe, who takes the reins on Jan. 13, will be able to build on Nike’s current momentum. Fifteen percent of sales are already online, and the company hopes to take that to 30% in the next few years.

“We think it could go even higher,” Goyal said.

Parker won’t disappear after the transition. He will remain in charge of the board as executive chairman. The 40-year Nike veteran also plans to stay closely involved with product design and marketing.

“To be clear, I’m not going anywhere,” he said in a memo obtained by Bloomberg News. “I’m not sick. There are no issues I’m not sharing. I strongly believe the best way for us to evolve and grow as a company is to bring in a phenomenal talent to join our team who has long been part of the Nike family.”

Parker turns 65 next year, and succession has been a big question at Nike for years. In Donahoe, the company gets an executive who has served on Nike’s board since 2014 but also brings an outside perspective.

At EBay, Donahoe was seen as a steady hand, steering the breakup of two companies that were heavily intertwined with long-term service agreements for a smooth transition. He initially resisted breaking the companies apart, but capitulated to pressure from activist investor Carl Icahn.

“I’ve been proud to be connected to Nike through my role on the board and now look forward to being a full-time member of the team,” Donahoe, 59, said in a statement.

Nike investors took the change in stride. After an initial dip and then a gain, the shares were little changed in extended trading on Tuesday. The stock was up 29% this year through the close.

The decision to pick a leader outside Nike’s executive ranks followed a shake-up over misconduct last year. Trevor Edwards, once seen as a CEO candidate, abruptly stepped down amid a review of sexist behavior at the company. Other executives were ousted as the world’s largest athletic brand tried to burnish its image.

Parker, who has been CEO since 2006, was dogged by other recent controversies. Documents released by the U.S. Anti-Doping Agency showed that he was directly aware of an experiment committed by Alberto Salazar, coach and co-founder of the Nike Oregon Project, which led to Salazar’s four-year ban from track & field. Parker has defended his involvement — and Salazar’s — and recently made the decision to shutter the Oregon Project after 19 years.

At the same time, Nike has pushed to modernize its operations.

It recently unveiled its store of the future in New York, a retail experience full of new technology that can only be unlocked by members using the Nike app. The Beaverton, Oregon-based company also recently unveiled a new basketball shoe, which tracks data on the wearer and whose laces can be tightened through the application.

Earlier this year, Nike purchased Boston-based data-science firm Celect, a move that the company said would bolster its understanding of consumer patterns. That acquisition came a year after Nike bought Invertex Ltd., an Israeli computer-vision startup. That technology was eventually unveiled as the driver of Nike Fit, an expansion of the Nike app that lets customers measure their feet at home.

The common thread throughout all this is the Nike app. Nike members spend three times more at Nike.com than guests do, a metric that Nike executives attribute to the company’s ability to better serve those that they know the most about.

The CEO announcement mirrors a similar reshuffling at Under Armour Inc., one of Nike’s main competitors, just hours before. Under Armour founder Kevin Plank is stepping aside as CEO at the end of the year, but — just like Parker — will assume the executive chairman title.

On the tech front, Nike remains far ahead of its competitors, Goyal said.

“They’re leading the way,” she said. “Where they are today is far beyond where any of the other athleticwear companies are.”

In his note to Nike employees, Parker praised Donahoe’s experience as a leader in e-commerce and strategy. He said the hire will specifically affect what Nike calls its “Consumer Direct Offense” — perhaps the company’s biggest initiative right now — a push to broaden its digital footprint so it can reach customers as individuals, on whatever platform or manner they prefer.

“John’s expertise in both consumer digital and enterprise technology is well known throughout the world,” he said.