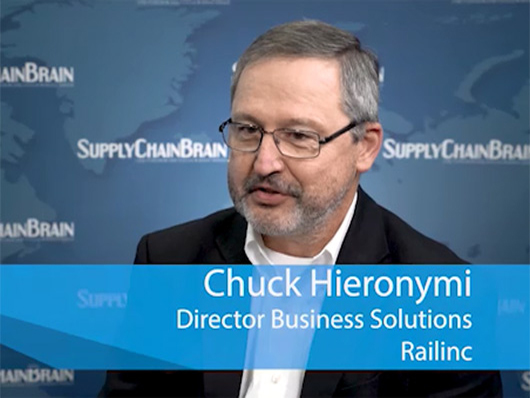 Freight railroads are striving to provide near- to real-time information on the status of containers and trailers. Chuck Hieronymi, director of business solutions with Railinc, tells how they’re doing it.

Hieronymi: Service has certainly been a key area of focus, and visibility has been a top priority for the vast majority of their customers. Over the years, the railroads have invested a significant amount in their various networks across North America to provide readers along the tracks. Those in turn can provide the latest shipment location for either railcars or containers. Railroads in North America have made a significant investment in what I’ll call near-real-time visibility.

SCB: So it’s the equipment that’s being tracked? Not the contents?

Hieronymi: That varies. You’re right in the majority of instances, that the tracking would be at the car level or, for intermodal containers, the well car level. Then we would associate those unique container numbers with the well cars. We know which unique containers are in each well car, so we can provide an update to customers.

SCB: Would you say we’re at the point where this enhanced shipment data is providing shippers with a competitive advantage?

Hieronymi: Absolutely. Over the last 10 years, we’ve seen a significant increase in interest and investment by shippers to gather data and deploy it in their transportation management systems, to get insights into how they can improve the rail portion of their overall supply-chain structures. Of course, they would then stitch the rail data together with truck and ocean data to get a multimodal view.

SCB: To what extent are rail shippers coming over from long-haul trucking, which has its own issues in the form of a driver shortage? And if that’s the case, are they enjoying the same or better level of service than they might have received from trucks?

Hieronymi: That’s certainly a dynamic that we’ve seen in the market for the last several years in particular. In the 500- to 800-mile lane length, there’s more competition between rail and trucks. Of course, there’s also a symbiotic relationship between the two, but it’s certainly is an area where there’s a focus among the rails on gaining more market share. Shippers have more choice, so there’s more competition and that ought to be better for everyone.

SCB: On the rail side, is shipment-status information near-time, real-time? How quickly is it getting to the people who need to see it?

Hieronymi: Generally speaking, when a railcar passes a reader, it will take a couple of minutes for that data to get to the railroads’ core systems. Then we go through the standardizing, scrubbing and normalizing process. We remove any errors, clean up inaccurate data and then aggregate it and make it available to the marketplace. That process is typically in the 15- to 30-minute range. And when you think about stretching across all of North America, rails are doing a pretty good job compared with what most people either have or used to have, which is a phone and a spreadsheet.

SCB: Because there’s just a handful of large railroads in operation in the country today, I would guess that alleviates some of the problems that were encountered in years past with the transfer of equipment from one railroad to another, right?

Hieronymi: That’s actually still occurring quite a bit. There’s a lot of interchanges on the carload side. We tie them together from origin to final destination, and provide the shipper with a single view of their shipment status.

SCB: What about modal interchange? How smooth is the transfer of freight and information from ocean to rail and the like?

Hieronymi: Our knowledge of how smooth that is is more secondhand, because our customers tell us about that. Once a particular shipment hits the rail, we have visibility to it. But what the market has clearly said it needs is a better view of those shipments from origin, even if it’s a multimodal move.

SCB: In the relationship between shippers and railroads, especially in intermodal, there has usually been a shipper’s agent in the middle. Are shippers dealing more directly with railroads now for that type of freight, or do we still have intermediaries who are providing that service?

Hieronymi: We have both. It’s hybrid model, where you can go direct or work with a third party.

SCB: What determines what happens when?

Hieronymi: The customer determines it. If they don’t have the scale to negotiate rates, they may go to a third party to do that on their behalf.

SCB What would you say is the first step that any shipper should take to improve technology connections to the railroads? What’s the state of the art, and how can shippers take advantage of it?

Hieronymi: The first thing is work with your railroad partner to see what they offer in terms of visibility. Number two, know that if you have a complex rail footprint in terms of your supply chain, it helps to have someone to tie all of the railroads together on your behalf.

SCB: What kinds of cutting-edge technology are out there that can improve these relationships?

Hieronymi: There are a number of things. Certainly GPS has played a larger and larger role, and telemetrics has been deployed on the rail side. GPS has also been deployed for a number of years on high-risk or high-value shipments. This is where shippers in some cases have invested in their own equipment, and they have GPS and telemetrics that allows them to track shipments.

The future is going to see more and smarter devices in all parts of the ecosystem — along the track, the wayside, the bridges and cars. The real opportunity is to tie all those sources together so that you have a choice as a shipper about how detailed you would like the data to be. In the next 10 years, the question’s not going to be, “Is there enough data?” It’s going to be, “There’s so much data — how do I whittle it down to what really matters for me?”