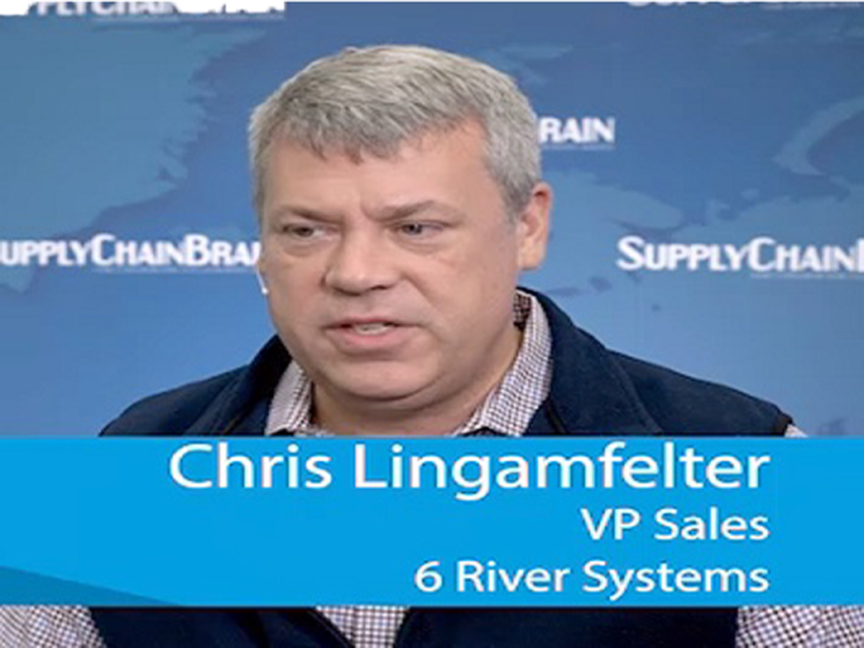 Robots won’t necessarily eliminate the role of humans in the distribution center. Chris Lingamfelter, vice president sales with 6 River Systems, tells how both can thrive in a collaborative environment.

SCB: What’s the current labor challenge that companies are facing in distribution centers and warehouses?

Lingamfelter: Every place we go, we hear the same thing, which is that there are challenges with labor availability. In some markets, over the past 10 years, we’ve seen labor and wage rates triple, from $8 an hour to $24 an hour. So it’s a real problem. You hear stories about DCs busing people in because they can’t get enough labor in the local markets to support their operations.

SCB: One obvious solution to the problem is the increased use of robots. Are they replacing humans?

Lingamfelter: We provide a collaborative robot — a cobot. Our robot’s called Chuck, and the human picker follows Chuck. On average, we double picker productivity with it.

SCB: Explain how it works.

Lingamfelter: Chuck is configurable by our cloud-based software. We look at the order pool and decide which orders to put on Chuck. We optimize that based on congestion, aisles, and what’s in the orders. Then we pick the 10 best orders to put on Chuck, based on minimizing the amount of travel and making the picker as efficient as possible.

SCB: What other factors are at play here?

Lingamfelter: There are basically three ways that we improve picking over a traditional cart-based pick. One is we eliminate the long walk, both to the picking area and back to return the cart. The picker stays in the picking location. He does his picks with Chuck in his zone, and then he scans into the next robot. Meanwhile, Chuck takes the orders to shipping or packing or whatever the next step is in the outbound process, without a human being pushing the cart. Then there’s the in-aisle walk. We intelligently look through the entire pool of orders and arrange picks in one aisle to minimize the amount of walking between each pick. Finally, we make the pick itself much more efficient. Instead of being instructed by a traditional RF [radio frequency] gun to go to a particular location, Chuck shows me a picture of the item. I know which level I’m picking in before I even get there. I know what I’m reaching for. I pick it, scan it, and put it into the order. I’m mentally prepared for what I’m asked to do before I’m even able to do it.

SCB: Another Chuck comes along at that point?

Lingamfelter: That’s right. You meet another Chuck, and repeat the process.

SCB: Might multiple Chucks be picking the pieces that go into a single order, or is one Chuck putting together the entire order?

Lingamfelter: A single order will be in a discrete order environment. We’ll complete an entire order at once. We can also do a zone-based pick, where we’re picking and passing. I’ll pick an order in my zone, then Chuck will come over and meet you, and you’ll finish it over in your zone. Then we merge them later.

SCB: What’s the risk of people and robots running into each other?

Lingamfelter: Chuck is a very intelligent system. It uses the same navigation system that you see on autonomous vehicles like a Tesla car. So Chuck doesn’t bump into people or things. If you come out of an aisle where there’s fork truck cross-traffic, Chuck will slow down.

SCB: Sounds like it’s all based on an extremely complicated algorithm.

Lingamfelter: We’re working on making the Chuck system smarter and smarter every day. It’s a process of continuous improvement. Every quarter we come out with new releases, and it gets better with time.

SCB: Will it always be left to the human to do the actual picking?

Lingamfelter: We’re about empowering the workforce to do their job more effectively. We do see there are areas where we can get even better. But I think we’re a long way from replacing all the warehouse labor in the building completely.