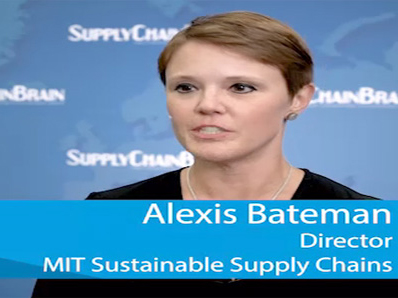 SCB: What is your definition of supply-chain transparency?

Bateman: Visibility is knowing what’s happening as your product is extracted, transformed, and moved along the supply chain. But there’s an additional element of transparency, which is disclosure. You may be getting more information about practices in the supply chain, but then you have to disclose it to the public so they can check whether you’re actually meeting those goals. There’s a due diligence element.

Bateman: As we all know, supply chains are not designed to be transparent. As you move upstream with suppliers, they don’t want to disclose information they think of it as a competitive secret. Plus if you’re trying to look into tier two, tier three, it’s going to be difficult to coerce your direct supplier to give you that information.

When it comes to transparency, we’re trying to figure out the right questions to ask. We don’t want to look at all things. We don’t need all the information in the world, but we do need to identify and answer certain questions about regulations such as the California Supply Chain Transparency Act and U.K. Modern Slavery Act. We need to be doing due diligence not just in our own operations and those of our immediate supplier, but upstream as well. Because you’re going to be held responsible for that.

SCB: When we talk about supply-chain transparency, we’re talking about how workers are treated in factories, as well as environmental concerns. We want to know where our raw materials came from, whether it’s a country that’s banned or has labor practices that aren’t up to snuff. Is that even possible to determine?

Bateman: It’s happening. People are doing it. Three are some leaders in the space. Patagonia was one of the first to do it as an apparel manufacturer. They made it part of their brand. And they were well ahead of their time. Now we’re seeing companies across different industries, particularly in food and apparel, that have been hit hard by regulation and consumer demands for more visibility in their products. If you see your nearest competitors doing it, then you’re probably going to do it, too. It started about a decade ago, with scorecards and setting up codes of conduct with direct suppliers, ensuring that they’re meeting minimum standards.

SCB: Is it all self-reporting? Or are there other ways of finding out this information?

Bateman: There’s a little of both. We’re seeing different approaches. You might trust a close supplier, but there’s also third-party verification. A few companies are vertically integrating some of their suppliers so they can get visibility into upstream materials. If you’re a big firm, you’re going to want verification that the information is true.

SCB: A lot of transparency regulations, such as those relating to conflict minerals, don’t have teeth to them. They’re just reporting requirements. The assumption is that customers won’t do business with you if you’re getting your stuff from a bad place. That raises the question of whether the consumer cares.

Bateman: We’ve done some studies on this, and I’d say it’s a mixed bag. If your product is on the shelf beside another with the same quality and price point, and one is a more trustworthy brand, we’re seeing more commitment and return buys. Consumers might not be willing to pay a price premium, but they might come back to the brand they see as more trustworthy.

SCB: As is so often the case, something that starts out as voluntary ends up being mandatory, in the form of a regulation. Is the problem of transparency going to stay the same, go away, or get better?

Bateman: I think it’s going to increase in focus. It’s true that these regulations that don’t have teeth. But if you don’t meet them, you’re going to be perceived negatively by external stakeholders, critics, and buyers.

SCB: Who’s the sheriff here — the one who upholds standards?

Bateman: NGOs are coming to your door to verify what you’re doing. There’s also the possibility that you might get a better return by investing in visibility. You might find that you can go directly to your supplier, cut out middlemen and save a little money along the way. Also, employees want to work for companies that are trustworthy. Patagonia’s turnover rate is less than 4%, which is incredible. So there’s value across the spectrum.

SCB: Do you believe we’re ever going to reach a point of true transparency in the supply chain, and that people will care about it all the way down the line?

Bateman: I think there’s going to be a waterfall effect in different industries that will impact consumers differently. Certain industries are feeling the most pressure. I’ve got a toddler, and I’m going to feed him yogurt. I want to know where that yogurt’s from, how it was produced, what goes in it, who produced it, how the cows were treated — all of these things. Are supply chains ever going to become fully transparent? Probably that will never happen. But they’re going to become increasingly so, to show that they’re trustworthy companies, exercising due diligence. That is definitely happening.