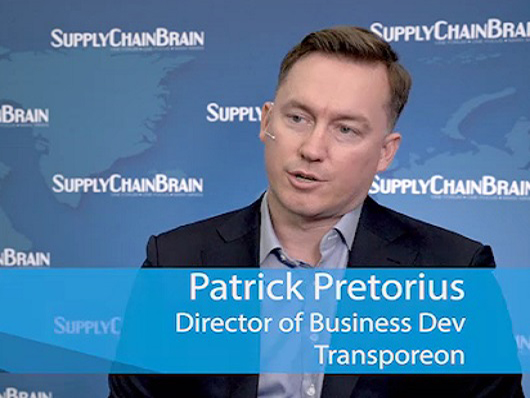 The latest carrier survey by Transporeon reveals some surprising trends in pricing — ones that the carriers themselves didn’t entirely anticipate, notes director of business development Patrick Pretorius.

SCB: Tell me about Transporeon’s latest carrier survey. How many carriers do you survey, and how did you go about conducting it?

Pretorius: We used our TMS [transportation management system] procurement module to conduct the survey. It was sent to over 4,000 carriers that are registered in our platform, predominantly in the U.S., Canada and Mexico. We asked questions about the markets, what they see coming down the line, what issues are bothering them, and what they see in the technology space.

SCB: Did you focus on any particular mode?

Pretorius: The tool is multimodal, but this particular survey was focused predominantly on full truckload — asset-based carriers doing over-the-road transportation in the North American market.

SCB: What did the report reveal about the carrier outlook on pricing?

Pretorius: It was in line with our expectations. In 2018, over 92% of respondents predicted rate increases, based on things like the capacity crunch and ELD [electronic logging device] mandate. This year, just under 50% of respondents predicted increases in prices, from 1% to 5% year over year. Most people predicted that. What’s interesting to us is that the outlook might actually seem overly positive, even from the carriers. Based on data coming out of RFPs [requests for proposals] in Q1 and Q2 this year, we are actually seeing more of a double-digit rate dip. And that’s for annual contracts year over year.

SCB: How do you explain that gap?

Pretorius: I think carriers have to protect their interests, and to a certain extent want to justify the rate increases they’re looking for. They’ve invested a lot of money in new assets. At the tail end of last year, orders for 53-foot dry vans were at some of the highest levels of that year. There’s always a dichotomy between what shippers expect, what carriers forecast, and what actually takes place.

SCB: So has the capacity crunch been alleviated somewhat?

Pretorius: We’re seeing that for sure. The two most highly ranked factors in the survey this year were overcapacity and lack of demand. Last year, those were ranked at the absolute bottom. So this tells a completely different story of what the market is doing this year compared to last.

SCB: Earlier this year, there were reports that shippers that had signed contracts with guaranteed volumes and capacity were backing away from those agreements and looking for better deals. Is that still happening?

Pretorius: That is happening. Around two-thirds of the carriers are saying their shipper clients are sticking to the contracts they negotiated last year. A third are seeing customers back out of contracts and head to the spot market. The market flips one way, then the other. A lot of shippers are realizing the importance of sticking to the agreements they have with their carriers through the long haul, despite what the market might be doing. So that the next time this type of issue rolls around, they’ll be in good graces with their carrier base.

SCB: Do shippers pay a penalty when they walk away from guaranteed contracts?

Pretorius: I don’t believe so. They just flip over to the spot market. In the ocean freight industry, there may be a penalty drawn up in the contract when you don’t meet your minimum order quotient. But we don’t predominantly see that in the North American truck market.

SCB: One of the big issues in transportation today is so-called digital transformation. To what degree are carriers actually embracing that?

Pretorius: They certainly are recognizing nowadays the capability for those technologies to assist them, especially when it comes to planning and hours of service. We’ve seen a lot of interest from shippers in time-slot management of dock scheduling. Carriers love that because it enables them to know exactly when to show up, how long they’re going to be at a customer’s premises, and when they can hit the road again. They can effectively plan their day around their hours of service [limitations], and keep their wheels on the road. For that reason, carriers are embracing technology a bit more than they might have in the past.

SCB: There are no hesitations about making the investment?

Pretorius: There is some hesitation historically when it comes to technology, but they’re starting to realize the benefits. We also asked the carriers if they’re pushing technology down into their subcontractor base, and if they’re using it to help them with assets that might not be under their direct management. We see a lag there for sure. So while they recognize the capabilities that shippers are bringing to them, they’re not necessarily embracing the technology themselves and passing it along to their subcontractors.

SCB: But aren’t you also saying that shippers are often the ones that are holding back on digitization — for example, sending bills on paper instead of in digital form?

Pretorius: That is absolutely true. I’m often shocked to learn that some pretty large shippers, managing thousands of lanes and hundreds of thousands of annual shipments, are still using Excel spreadsheets. Or they’re booking freight over the phone. So there’s a ways to go for sure. Both parties have the responsibility to look into what technology options are out there.

SCB: What do you mean when you speak of “digital insourcing”?

Pretorius: It’s a phrase that we use to describe an approach to processes that tends toward insourcing. You’re bringing back control to the shipper side of the conversation, but relying more on technology to enable you to do that. As opposed to spending a ton on new assets, or hiring a lot of new people. Technology enables you to navigate that line between in-house and outsourced, but with a lesser number of assets.

SCB: So we’re beginning to see signs of a move away from outsourcing?

Pretorius: It’s been around for decades now, and has been viewed as a kind of a cure. But a lot of companies are beginning to worry about losing touch with the end customer. They’re saying now, “Maybe outsourcing all of this wasn’t the best idea.” The ones that had a very heavily outsourced model might have suffered more under the capacity crunch because they didn’t have relationships with the carriers. So they’re looking at technology as a way to bring those processes back in house.