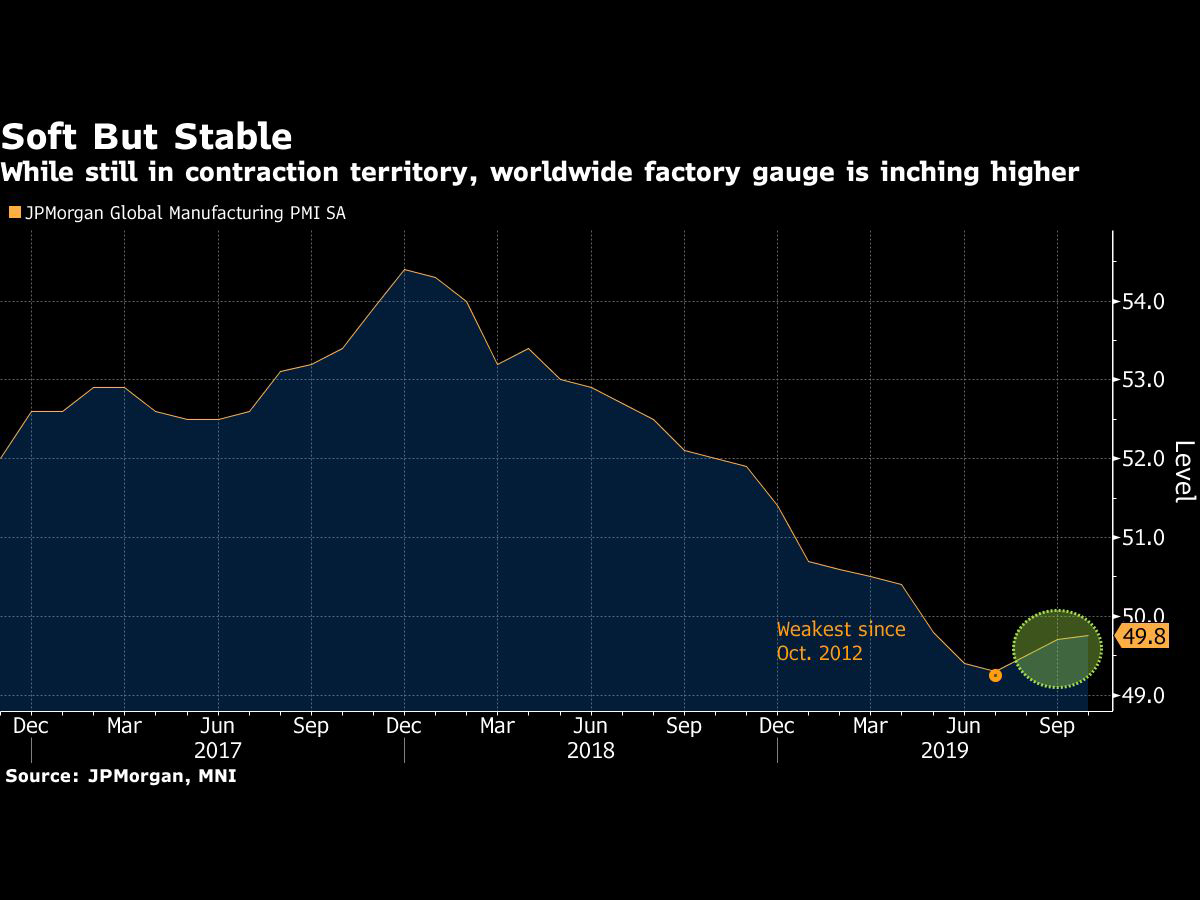 The worst may be over for the world economy’s deepest slowdown in a decade.

A wave of interest-rate cuts by central banks including the Federal Reserve and mounting hopes of a U.S.-China trade deal are buoying confidence in financial markets just as key economic indicators show signs of stabilization after recent declines.

While a robust rebound may still not be on the cards, the relative improvement could put an end to the fears of just a few weeks ago that the world economy was barreling toward recession. Such an environment looks for now to be enough for Fed Chairman Jerome Powell and fellow monetary policy makers to take a pause from doling out monetary stimulus.

“We do see multiple reasons for a stabilization in global growth in 2020 versus 2019,” said David Mann, chief economist for Standard Chartered Plc in Singapore, who shares the International Monetary Fund’s expectation that global growth will accelerate next year.

Among the reasons for confidence: While JPMorgan Chase & Co.’s global manufacturing index contracted for a sixth month in October, it inched closer toward positive territory as both output and orders firmed.

In the U.S., the Institute for Supply Management’s gauge of factory activity stabilized in October while the government’s jobs report last week showed payroll gains exceeded forecasts and hiring in the previous two months was revised much higher. The ISM’s gauge of services is also showing signs of improvement.

In Europe, there are also tentative signs of health after it was squeezed by the trade war as well as Brexit. The euro-area economy expanded more than forecast in the third quarter and while Germany may already be in recession, the Ifo Institute reported that expectations among its manufacturers edged up in October.

As for Asia, inventories of semiconductors in South Korea fell the most in more than two years in September in a sign a slump in global technology is ending.

Financial markets are tuning into the optimism. U.S. stock benchmarks climbed to all-time highs on Monday and the yield on the 10-year Treasury note rose. European and Asian stocks have also advanced.

“I just look at the fiscal/monetary mix, it’s the most stimulative that I think I’ve ever seen,” said billionaire hedge fund manager Paul Tudor Jones on Tuesday. “It’s no wonder that the stock market’s hitting new highs. It’s literally the most conducive environment, certainly in the short run, for economic growth and strength that I’ve ever seen.”

One key reason for the potential turn is the wave of interest-rate cuts from global central banks. Of the 57 institutions monitored by Bloomberg, more than half cut borrowing costs this year with the Fed doing so three times and the European Central Bank pushing its deposit rate further into negative territory. Rate cuts also operate with a lag so the positive effects of easier monetary policy have yet to fully flow through, meaning a further impulse likely awaits.

Powell last week hinted the U.S. central bank may be done reducing borrowing costs as he said the stance of policy was now “appropriate” to keep the economy growing moderately. “It would take a material change in the outlook for me to think that further accommodation would be required,” Fed Bank of San Francisco President Mary Daly said on Monday.

Also driving sentiment is that President Donald Trump and President Xi Jinping are on the cusp of signing “phase one” on a trade deal, which could be enough for global commerce to find a footing. China is reviewing locations in the U.S. where Xi would be willing to meet with Trump to sign a pact.

Morgan Stanley economists reckon the contraction in global trade volumes likely narrowed in October, declining 0.6% compared to 1.3% in September. Retail, auto and semiconductor sales are all stabilizing, they said in a report this week.

Elsewhere in Europe, the risks of a so-called no-deal Brexit have also diminished after the EU extended the deadline on the U.K.’s departure until the end of January and Prime Minister Boris Johnson called a December election in the hopes of breaking the impasse between politicians.

The soft landing scenario isn’t fully sealed. In May, similar hopes were building, only for Trump to ramp up tensions with China. While Washington and Beijing have signaled they’re getting closer to agreeing on the first phase of a deal, it’s not clear whether trade talks would continue toward a comprehensive agreement.

“If the U.S.-Chinese trade escalates again, or if the U.S. starts a new trade war against the only other economy of almost equal size, the EU, it could all still go wrong,” said Holger Schmieding, chief economist at Berenberg Bank. “But in the absence of such new political shocks, chances are that the global downturn could peter out in early 2020 and make way for a modest upturn thereafter.”

The strength of any revival may ultimately depend on the health of China’s economy, which expanded in the third quarter at its weakest pace in decades and where evidence of a bottoming out in demand remains tentative.

A gauge of Chinese manufacturing dropped this month to the lowest level since February while a measure of new export orders contracted at a faster pace. At the same time, construction, real estate, consumption and services are holding up, buoying expectations that officials are managing a gradual slowdown.